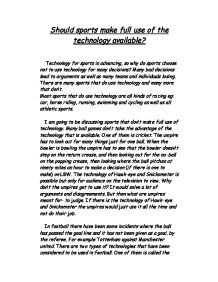 Should sports make full use of the technology available?

But then what are umpires meant for- to judge. If there is the technology of Hawk-eye and Snickometer the umpires would just use it all the time and not do their job. In football there have been some incidents where the ball has passed the goal line and it has not been given as a goal, by the referee. For example Tottenham against Manchester united. There are two types of technologies that have been considered to be used in football. One of them is called the goal line technology this means that the football would contain a microchip inside, so when it crosses the goal-line the referee is alerted by a bleeper-type system. ...read more.

But this would resolve problems such as the incident between Tottenham and Manchester united. Video replays have also been considered for sports such as Rugby after the vital Heineken Cup match between Bath and Swansea- a try that shouldn't have been allowed. Bath deserved their victory by the end but the result could have been very different. Another incident was when Joost van der Westhuizen's try put England on the back foot against South Africa in the World Cup. If the technologies worked there would be no unfairness. But what if the technologies didn't work? There would be more arguments. Technology would never be considered for sports thereafter. Most ball games don't use technology. Technology should be used more often for all games. In my opinion technologies would resolve a lot of problems between teams and especially for the crowd-who come to watch a fair game. ...read more.