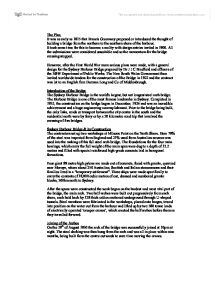 The Plan. It was as early as 1815 that Francis Greenway proposed or introduced the thought of building a bridge from the northern to the southern shore of the harbour. It took some time for this to become a reality with design entries invited in 1900. All the submissions were considered unsuitable and so the momentum for the bridge crossing stopped. However, after the First World War more serious plans were made, with a general design for the Sydney Harbour Bridge prepared by Dr J J C Bradfield and officers of the NSW Department of Public Works. The New South Wales Government then invited worldwide tenders for the construction of the Bridge in 1922 and the contract was let to an English firm Dorman Long and Co of Middlesbrough. Introduction of the Bridge The Sydney Harbour Bridge is the world's largest, but not longest steel arch bridge. The Harbour Bridge is one of the most famous landmarks in Sydney. Completed in 1932, the construction on the bridge began in December, 1926 and was an incredible achievement and a huge engineering accomplishment. Prior to the bridge being built, the only links, roads or transport between the city centre in the south and the residential north were by ferry or by a 20 kilometre road trip that involved the crossing of five bridges. ...read more.

The surface area of this huge bridge is that of 60 sport fields and requires approximately 80,000 litres (21,000 gallons) of paint (which is required for each coat!). Before Paul Hogan (from the movie Crocodile Dundee) became famous, he worked on the Sydney Harbour Bridge as a painter. The deck is 59 metres (194 feet) and was officially opened on 19 March 1932. The total cost of the Bridge was approximately 6.25 million Australian pounds ($A13.5 million), and was eventually paid off in 1988 by a plan of using what is known as toll charge. The initial toll for a car was 6 pence (in our time 5 cents) and a horse and rider was 3 pence (2 cents). Today the toll costs $3.00. The toll is now used for bridge maintenance and to pay for the Sydney Harbour Tunnel. The annual maintenance costs are approximately $5 million. More than 150,000 vehicles cross the bridge each day. Opening Celebrations The official opening day on Saturday 19 March 1932 was a momentous occasion, drawing remarkable crowds (estimated between 300,000 and one million people) to the city and around the harbour foreshores. The NSW Premier, the Hon. John T. Lang, officially declared the Bridge open. However, before Premier Jack Lang arrived to cut the ribbon, there was a sudden commotion as Captain Francis de Groot rode forward on his horse. ...read more.

top of aircraft beacon 141 metres above mean sea level Width of deck 49 metres Clearance for shipping 49 metres Height of pylons 89 metres above mean sea level Base of each abutment tower 68 metres across and 48 metres long (two pylons rest on each abutment tower) Total length of bridge 1149 metres including approach spans Bearing pins Each of the four pins measures 4.2 metres long and 368 millimetres in diameter Thrust on bearings Under maximum load approximately 20,000 tonnes on each bearing Number of rivets Approximately 6,000,000 Largest rivet Weighed 3.5 kilograms and was 395 millimetres long Longest hanger 58.8 metres Shortest hanger 7.3 metres Total weight of steelwork 52,800 tonnes including arch and mild steel approach spans Weight of arch 39,000 tonnes Rock excavated for foundations 122,000 cubic metres Concrete used for bridge 95,000 cubic metres Granite facing used on pylons and piers 17,000 cubic metres Allowance for deck expansion 420 millimetres Allowance for arch expansion The arch may rise or fall 18 centimetres due to heating or cooling Number of panels in arch 28, each 18.28 metres wide Record tonnage erected 589 tonnes of steelwork was erected on the arch in one day on 26 November 1929 Paint required 272,000 litres of paint were required to give the Bridge its initial three coats Info and research came from: http://www.aviewoncities.com/sydney/harbourbridge.htm http://www.sydneyharbourbridge.info/ http://www.pylonlookout.com.au/history_frs.htm http://sydney-harbour-bridge.bos.nsw.edu.au/bridge-syllabus.php http://www.cultureandrecreation.gov.au/articles/harbourbridge/ http://www.australiangeographic.com.au/journal/on-this-day-in-history-opening-of-the-sydney-harbour-bridge.htm?printmode=true ...read more.