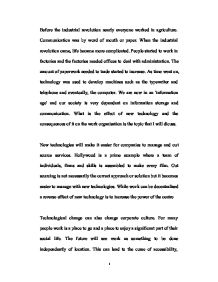 The changes being brought by computers have fundamentally changed the shape of working life. The biggest problem is that it has created an underclass that has fallen out of the bottom of the job market.

Before the industrial revolution nearly everyone worked in agriculture. Communication was by word of mouth or paper. When the industrial revolution came, life became more complicated. People started to work in factories and the factories needed offices to deal with administration. The amount of paperwork needed to trade started to increase. As time went on, technology was used to develop machines such as the typewriter and telephone and eventually, the computer. We are now in an 'information age' and our society is very dependant on information storage and communication. What is the effect of new technology and the consequences of it on the work organisation is the topic that I will dicuss. New technologies will make it easier for companies to manage and out source services. Hollywood is a prime example where a team of individuals, firms and skills is assembled to make every film. Out sourcing is not necessarily the correct approach or solution but it becomes easier to manage with new technologies. While work can be decentralised a reverse effect of new technology is to increase the power of the centre Technological change can also change corporate culture. For many people work is a place to go and a place to enjoy a significant part of their social life. ...read more.

"The TRICO mini-mill in the United States, a joint venture of US, Japanese and British steel companies, has a workforce of less than 600 producing 2 million ton of steel a year, whereas in the United Kingdom 4,000 workers directly involved in steel making produce 3 to 4 million ton" over the same period. In the computer industry machines are used to assemble circuit boards. These used to be done by people, but computer-controlled machines are much faster, more reliable, and it reduces the risk of injury of workers, according to the historic statistic, the compensation of workers' injury is one of the biggest cost in the companies. New technologies have created a real revolution in reducing the amount of human work thanks to robots, computers, telecommunication and now the combination of these different items we call Multimedia. As above, we have known the good effect of the new technology that brings to us. Let's go through the consequences of it. Many people nowadays are generally fearful and distrustful of change. Change that involve new and complex technologies are especially stressful, particularly to older and less educated workers. They are fearful of losing their jobs, of losing control to machines, and of becoming useless. Changes brought by technology have made the job market far less flexible than it was before. ...read more.

The workers' families can also be exposed in a number of ways: they can inhale the pesticides which may linger in the air, they can drink contaminated water, or they can be exposed to residues which may be on the worker's clothes. Other people in the community can all be exposed in the same ways as well. When the chemicals get absorbed into the soil or leach into groundwater supplies, the adverse effects on the natural environment can be permanent. On the whole, the introduction of new technology has led to the reduction in the number of jobs available and this has affected some parts of the country more than others. On the other hand it has led to the creation of different jobs. Many of the new jobs created by computerisation are very interesting, requiring skilled and well-trained individuals. However, for some people who work with the machines, it could be argued that their jobs do not require many skills and the job is often very boring. So one unskilled person looking after machines has replaced many skilled workers. Some people argue that the skills that have taken many generations to learn and pass on to new workers will soon be lost and we then will be totally dependent on technology to do the job. ...read more.