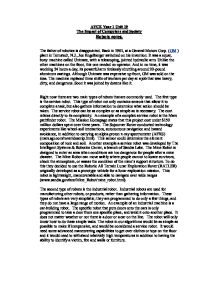 The Impact of Computers and Society - Robots notes.

AVCE Year 1 Unit 19 The Impact of Computers and Society Robots notes. The father of robotics is disappointed. Back in 1961, at a General Motors Corp. (GM ) plant in Ternstedt, N.J., Joe Engelberger switched on his invention. It was a squat, boxy machine called Unimate, with a telescoping, jointed hydraulic arm. Unlike the other machines on the floor, this one needed no operator. And in no time, it was working 24 hours a day, its powerful arm tirelessly shuttling around 20-pound aluminum castings. Although Unimate was expensive up front, GM was sold on the idea. The machine replaced three shifts of workers per day at a job that was heavy, dirty, and dangerous. Soon it was joined by dozens like it. Right now there are two main types of robots that are commonly used. ...read more.

The Mine Robot can move safely where people cannot to locate survivors, check the atmosphere, or assess the condition of the mine's support structure. To do this they decided to use the Robotic All Terrain Lunar Exploration Rover (RATLER) originally developed as a prototype vehicle for a lunar exploration mission. This robot is lightweight, maneuverable and able to navigate over wide ranges (www.sandia.gov/isrc/Mine_Robot/mine_robot.html). The second type of robots is the industrial robot. Industrial robots are used for manufacturing other robots, or products, rather than gathering information. These types of robots are very simplistic; they are programmed to do only a few things, and they do not have a large range of motion. An example of an industrial machine is a car-building robot. The specific robot that puts doors onto the cars is only programmed to take a door from one specific place, and weld it onto another place. ...read more.

Though human looking robots are the most appealing robots under development, most don't look anything like us at all. This is probably because we humans are not best designed to perform endless repetitive tasks, or for crawling into dangerous and often inaccessible places. But more and more robots are entering our daily lives, and whilst the arrival of a totally servile robot to serve our every need remains a futuristic dream, the advances being made in computing power are bringing that dream closer to reality. In manufacturing and industry robots are now big business and are rapidly transforming the workplace. A whole new generation of robots that work faster, are cheaper and are more intelligent are doing more and more of our jobs. And scientists are now developing robots with digital brains that are capable of integrating vision, sound, touch and speech - and are even able to repair themselves and evolve. ...read more.