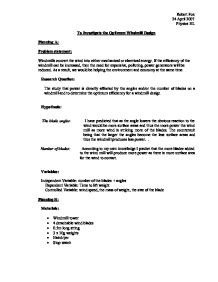 To Investigate the Optimum Windmill Design Planning A: Problem statement: Windmills convert the wind into either mechanical or electrical energy. If the efficiency of the windmill can be increased, then the need for expensive, polluting, power generators will be reduced. As a result, we would be helping the environment and economy at the same time Research Question: The study that power is directly affected by the angles and/or the number of blades on a windmill and to determine the optimum efficiency for a windmill design Hypothesis: The blade angles: I have predicted that as the angle lowers the obvious reaction to the wind would be more surface areas and thus the more power the wind mill as more wind is striking more of the blades. The countersuit being that the larger the angles become the less surface areas and thus the windmill produces less power. . Number of blades: According to my own knowledge I predict that the more blades added to the wind mill will produce more power as there is more surface area for the wind to contact. ...read more.

This observation has annotations that power is directly proportional to the number of blades but however the results can not only be dependant upon this as too few variations of trials were tested for a rounded, fair result. For the blade angles there was quite a obvious result that the 30� produced the highest power (0.020 W) and quite a substantial difference of 0.012 W, at (0.08 W) for the 70� angle. Limitations of the experiment would be that there was not a variation of shape of the blade and change of material. The wind speed and direction was another factor as this was not held constant during the trails. These factors if tweaked slightly could affect the results vastly. The measuring devices used could have been more precise. The wind speed and direction could have been kept constant by fixing the hairdryer in place at a certain angle and distance always from blades for fair results. Varying the blades shapes and material would give a better understanding and a more supporting experiment to prove the hypothesis with. ?? ?? ?? ?? Robert Fox 24 April 2007 Physics HL ...read more.