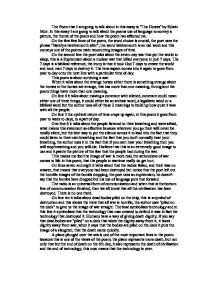 The Poem that I am going to talk about in this essay is "The Horses" by Edwin Muir. In this essay I am going to talk about the poems use of language to convey a picture, the theme of the poem and how the poem has affected me. On the first few lines of the poem, the word choice is crucial, the poet uses the phrase "Barely a twelvemonth after", the word twelvemonth is an old word and this conveys one of the poems main reoccurring images of time. On the second line the poet talks about the seven-day war that put the world to sleep, this is a Euphemism about a nuclear war that killed everyone in just 7 days. The 7 days is a biblical reference, the irony is that it took God 7 days to create the world and took man 7 days to destroy it. The time aspect comes into it again to goes from year to day onto the next line with a particular time of day. This poem is about surviving a war. When it talks about the strange horses either there is something strange about the horses or the horses are strange, this has more than one meaning, throughout the poem things have more than one meaning. ...read more.

On line 13 they talk about the radios that stand in our kitchens, this means that the death was sudden, that people would have been playing or doing normal things and had no idea about what was going to happen. One the next line it talks about the radios turned on, perhaps, in a million rooms, but what will they be turned on for, that something might be said and if it does then they wouldn't listen, the people don't regard the radios as a symbol of hope anymore, the radio is technology and the people have turned their backs on technology now. This is a good way to say that they have turned their backs on technology, I didn't get it at first but after I read it a few times I caught on. The old bad world that swallowed its children quick, the bad is emphasised and when it talks about the children in one great gulp that is a mythological image, Kronos was jealous of the powers that his children had so he ate them. This puts the image of cruelty, the one great gulp emphasises the speed of the destruction and the emphasis of rejection. What the people are rejecting is the technology that is why as I have said before why the radio was referred to as it, the radio at this point changes to an image of what they are against. ...read more.

The people and nature have to get reacquainted. The relationship between man and nature is not of ownership but of companionship, at first the people thought that they owned the horses and they sold the horses, if you sell a friend it becomes betrayal. The biggest and most important theme of this poem is mans betrayal. On line 50 it talks about Eden and how God made ruler of the world but also had the responsibility of looking after all the other animals. Man had betrayed that trust and he broke the companionship for technology. The poet uses horses in this poem because they played a large part in our civilisations development, they helped us explore, they fed us etc. And in the last 2 lines of the poem it talks about how nature forgived us with open arms again is clear, it still surprises humans and makes them sorry that they ever turned their backs on nature for technology. I enjoyed reading this poem and the imagery used in this poem is good, only after some of it has been explained. This poem emphasises the fact that man will if it can find something newer, even if it isn't better just because it is new they think that is improved. ...read more.