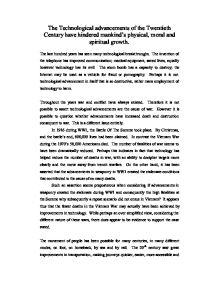 The Technological advancements of the Twentieth Century have hindered mankind's physical, moral and spiritual growth.

The Technological advancements of the Twentieth Century have hindered mankind's physical, moral and spiritual growth. The last hundred years has seen many technological breakthroughs. The invention of the telephone has improved communication; medical equipment, saved lives, equally however technology has its evil. The atom bomb has a capacity to destroy; the Internet may be used as a vehicle for fraud or pornography. Perhaps it is not technological advancement in itself that is so destructive, rather mans employment of technology to harm. Throughout the years war and conflict have always existed. Therefore it is not possible to assert technological advancements are the cause of war. However it is possible to question whether advancements have increased death and destruction consequent to war. This is a different issue entirely. In 1916 during WW1, the Battle Of The Somme took place. By Christmas, and the battle's end, 800,000 lives had been claimed. In contrast the Vietnam War during the 1970's 58,000 Americans died. The number of fatalities of war seems to have been dramatically reduced. Perhaps this indicates in fact that technology has helped reduce the number of deaths in war, with an ability to decipher targets more clearly and the move away from trench warfare. On the other hand, it has been asserted that the advancements in weaponry in WW1 created the stalemate conditions that contributed to the cause of so many deaths. ...read more.

Television was not developed until the 1920's; it had little importance in communication until the late 1940's. Many scientists contributed to the development of the television and no one person can be called its inventor. Two types of television exist, Open circuit television and Closed circuit television (C.C.T.V.). Open circuit television creates signals, which can be received by all televisions within the range of those signals. This allows for the operation of worldwide communication. Information and entertainment issues are played out to the world at the touch of a button, educating the public. Weather, traffic and news reports make planning possible for individuals. People can make informed choices about situations. The television is an aid to education about other cultures and heritages. It promotes the arts through comedy, drama and language and provides a tool for education of the general public. Political, environmental and social issues are brought to public attention. Such benefits are undisputed. Television also provides a launch pad for violent, sexual and undesirable material to be transmitted, which may be detrimental to public morality - particularly in the case of children. Arguments over this issue are rife with others arguing that mere exposure to such influences by way of television cannot affect an individual. ...read more.

However vaccinations are still helping us live a longer and healthier life. In the case of diabetics for example daily injections allow them to live a normal and healthy life. In the third world where this fairly basic technology is not available, people die of the disease. In recent years genetic engineering and cloning has instigated great advances in medicine. There is now a prospect of using such technology to develop transplant organs, giving humans the chance to live much longer lives. There is however a moral argument against such intervention and this is indeed quite sound when ethics are called into question. Is it right to develop a human life to be used as a medical transplant source? Surely this questions human dignity. Many religions are against the idea of cloning, as the clones are not unique and were not created by man and woman through sexual intercourse. Fertilisation drugs and infertility treatments have seen many families blessed with a child; it is however debated in different areas whether such intervention is morally repugnant. So, is it right to say that the advances in technology throughout the 20th century have hindered mankind's moral, spiritual and physical growth. The evidence in the text clearly shows us that it hasn't. Yet perhaps it is humanities incapability to control such machinery and be the threat. ...read more.