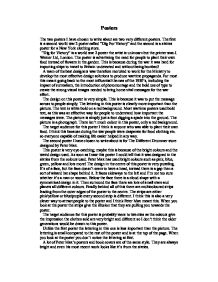 The two posters I have chosen to write about are a second world war 2 poster called &quot;Dig For Victory&quot; and a sixties poster for a New York clothing store.

Posters The two posters I have chosen to write about are two very different posters. The first is a second world war 2 poster called "Dig For Victory" and the second is a sixties poster for a New York clothing store. "Dig for Victory" is a world war 2 poster the artist is unknown but the printer was J. Weiner Ltd, London. The poster is advertising the need for people to plant their own food instead of flowers in the garden. This is because during the war it was hard for importing ships to travel to Britain undetected and without being bombed! A team of the best designers was therefore recruited to work for the Ministry to develop the most effective design solutions to produce wartime propaganda. For most this meant going back to the most influential themes of the 1930's, including the impact of surrealism, the introduction of photomontage and the bold use of type to create the strong visual images needed to bring home vital messages for the war effort. ...read more.

The second poster I have chosen to write about is for The Different Drummer store designed by Peter Max. This poster is very eye-catching; maybe this is because of the bright colours and the weird design used. As soon as I saw this poster I could tell that it was designed in the sixties from the colours used. Peter Max has used bright colours such as pink, blue, green, yellow and lots more! The design in the centre of this poster is very puzzling. It's of a face, but the face doesn't seem to have a head, instead there is a gap then a sort of wizard hat shape behind it. It faces sideways to the left and I'm not too sure whether it's a man or woman. Below the face there is a cloud shape with a symmetrical design in it. Then surround the face there are lots of small stars and planets all different colours. ...read more.

They are always bright and even his most recent work looks like it's from the sixties. The two posters are both very different but both do a good job of attracting people using two different techniques. One uses a more serious to the point message whilst the other uses a more fun colourful approach. The "Dig for Victory" poster doesn't use a lot of colour in fact, only one, red whereas in "The Different Drummer" poster it's hard to count all the colours used. The second poster is very surreal whereas the first uses a real picture. Of the two posters I prefer "the Different Drummer Shop". It's a more eye-catching fun poster and I'm the kind of person who likes bright colours and mysterious designs, maybe this is because its target audience is for teenagers and I am 15. The war time poster was effective during the war but now it seems dull and boring whereas the other poster is the kind of poster you never get tired of looking at. Gillian Hill ...read more.