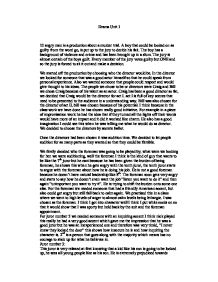 12 angry men is a production about a murder trial.

Drama Unit 1 12 angry men is a production about a murder trial. A boy that could be looked on as guilty from the word go, is put up to the jury to decide his fait. The boy has a background of violence and crime and has been brought up in a slum. The jury is almost certain of the boys guilt. Every member of the jury votes guilty but ONE and so the jury is forced to sit it out and make a decision. We started off the production by choosing who the director would be. In the director we looked for someone that was a good actor himself so that he could speak from personal experience. Also we wanted someone that people could respect and would give thought to his ideas. The people we chose to be or directors were Craig and Bill we chose Craig because of his talent as an actor. Craig has been a good director so far, we decided that Craig would be the director for act I. act I is full of key scenes that need to be presented to the audience in a understanding way. Bill was also chosen for the director of act II, bill was chosen because of his potential. I think because in the class work we have done he has shown really good initiative. For example in a piece of improvisation work he had the idea that if they turned all the lights off their words would have more of an impact and it did it worked like charm. He also has a good imagination I could see this when he was telling me what he would do as director. We decided to choose the directors by secrete ballot. Once the directors had been chosen it was audition time. We decided to let people audition for as many parts as they wanted so that they could be flexible. ...read more.

Ricardo played this character well but I wasn't completely satisfied with how he dressed and how he sat he was meant to be a business man and therefore used to sitting in an office and should therefore be happy to be in a chair but Ricardo kept moving around. Influences: What was my character like; well he is a sports teacher at a high school, so I tried to incorporate this in the way I acted. My character I think was being held back by the burden of being foreman, he loses his temper quickly because the last thing he wants to do is be in a jury room but the worst part is that he has been made foreman. My character says quite a lot at the very beginning and so I needed to rehearse these parts a lot and making sure that I put emphasis on the right parts also I had to be very careful that I didn't just ramble on because that is not what this foreman is like. He tries to make himself look important and gets very angry when people don't follow the system that he has formulated. I wore white socks to try and put across the message that I am a sportsman and not an office worker. Also near the beginning of the term we did some mask work which helped a lot to formulate the body language that my character needed. I put a mask on and sat in a chair at home and tried different postures and filmed the process and decided myself which was the most convincing. I found that it was one that started off well presented and smart but after fifteen minutes of arguing in the jury room I would stop trying to look smart and slouch down on the chair, and also when I was being talked to I would try and look smart and educated. ...read more.

For example I would butt in every so often saying "let's go in order" because my character is the kind of person that gets angry if he has devised a system and people don't stick to it. We had to act out all of the script in our own way so we missed quite a lot of detail out which I think was a good thing, because I am always half asleep when we reach the end of our act so I think that it was good that we missed out detail because I think we kept the audiences conscious. I think my weakness was that when I got angry at number 10 for calling me a kid I think I said my lines too flatly I should have gone up and down more. I think that my characterisation was good I was moping my head I undid my top buttons and cuffs I also kept moving in position to give the audience the impression that I was uncomfortable in a office. I thought that I was a convincing foreman, I had white sock s to show I was sporty, and I soon gave up looking smart as though I wasn't used to being in a suit so I think that I haven't ever acted better. If I was to try and change some thing about the play I would change the stage I think we couldn't have picked a worse stage design. I think we should have had a table going outwards and lengthways like in the diagram below. I think that this stage design would work a lot better because the audience at the side would not have a obstructed view, also I think that the foreman should be at the head of the table because he is the one who is trying to keep everything organised. Also the script is designed so that jurors confer to each other over the table not along it. ...read more.