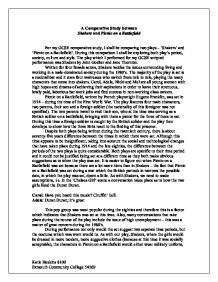 A Comparative Study between Shakers and Picnic on a Battlefield

A Comparative Study between Shakers and Picnic on a Battlefield For my GCSE comparative study, I shall be comparing two plays - 'Shakers' and 'Picnic on a Battlefield'. During this comparison I shall be exploring both play's period, society, culture and style. The play which I performed for my GCSE scripted performance was Shakers by John Godber and Jane Thornton. Written for four female actors, Shakers tackles the issues surrounding living and working in a male-dominated society during the 1980's. The majority of the play is set is a cocktail bar and it stars four waitresses who switch from role to role, playing the many characters that come into shakers. Carol, Adele, Nicki and Mel are all young women with high hopes and dreams of achieving their aspirations in order to leave their strenuous, lowly paid, laborious bar work jobs and find success in non-working class careers. Picnic on a Battlefield, written by French playwright Eugene Franklin, was set in 1914 - during the time of the First World War. The play features four main characters, two parents, their son and a foreign soldier (the nationality of this foreigner was not specified). ...read more.

Picnic on a Battlefield is certainly male-dominated, apart from there being more male characters than female characters, the place in which the play was set indicates the fact that the society was male-dominated. On a battlefield during 1914, the men took charge, lead the troops and fought for their country. It was thought that a battlefield was no place for a woman. The characters of Shakers were part of the working-class society in which people had to accept that this meant long hours, hard work and little pay - the girls continually complain throughout the play about this:- Nicki: ...I hate this job; the hours are awful, the customers less than polite. They treat you like shit, but unemployment is so high that any job is a job... We chose to set Shakers in Liverpool - the Liverpudlian accent is often seen to be a very 'common' accent, therefore the audience could therefore assume that we were members of the working-class. In contrast to this the characters in Picnic on a Battlefield came from the middle-class and we could also deduce from their more well-spoken accents that there of a higher class. However, in Picnic on a Battlefield, the characters were clearly of very different statuses. ...read more.

We played all the characters in the play, deliberately showing to the audience that we are doing this purposely. The reason why we did this was so that audience could see the mocking of stereotypes mentioned early. During performance, when we were play male television producers, we wore suits but with skirts. This worked because the audience could see that we were playing men by the way we talked and the way we sat, but knew that we girls because we were still wearing our waitress skirts - this meant that the audience could understand that we were deliberately playing the men how they would have been perceived by society, instead of acting naturalistically. I conclude that the comparison of these two texts highlights that both plays have some aspects in common regarding the purpose of writing each play (to mock the false perceptions society has of different people), but there are more aspects of the two plays which differ mainly because of the massive difference in the two plays' time periods. This not only affects their societies and cultures, but it affects the costumes, the language and the historical on-goings of each play. Katie Heskins 8100 Exmouth Community College 54269 ...read more.