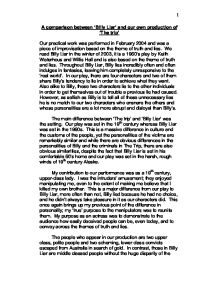 A comparison between 'Billy Liar' and our own production of 'The trip' Our practical work was performed in February 2004 and was a piece of improvisation based on the theme of truth and lies. We read Billy Liar in the winter of 2003, it is a 1960's play by Keith Waterhous and Willis Hall and is also based on the theme of truth and lies. Throughout Billy Liar, Billy lies incredibly often and often indulges in fantasies, leaving him completely unresponsive to the 'real world'. In our play, there are four characters and two of them share Billy's tendency to lie in order to achieve what they want. Also alike to Billy, these two characters lie to the other individuals in order to get themselves out of trouble a previous lie had caused. However, as selfish as Billy is to tell all of these unnecessary lies he is no match to our two characters who ensnare the others and whose personalities are a lot more abrupt and disloyal than Billy's. ...read more.

This once again brings up my previous point of the difference in personality; my 'true' purpose to the manipulators was to reunite them. My purpose as an actress was to demonstrate to the audience how easily deceived people can be, even today, and to convey across the themes of truth and lies. The people who appear in our production are two upper class, polite people and two scheming, lower class convicts escaped from Australia in search of gold. In contrast, those in Billy Liar are middle classed people without the huge disparity of the characters in The Trip. In The Trip, we show our character's position in society by their accents and the way they behave around each other. For example, the upper-class lady, Elizabeth, walks and talks completely differently to the two convicts. Even when they are pretending to be upper class, they still don't sound quite like Elizabeth. In Billy Liar, it's clear that the characters are middle-class because their house is a modern, small abode. ...read more.

This is the complete opposite to Billy Liar, which is set in a proscenium arch to give an impression of a fourth-wall. Within this arch the set would be very much realistic, including 1960s furniture and furnishings. It would appear as a real 1960's house. Billy Liar is performed in this set to engross the audience into the set therefore they believe they are looking through a fourth wall and the play seems and looks real to them. Between these plays there is a huge gap of culture, time and well, pretty much everything, but have the people's attitudes really changed that much? Has humanity itself changed all that much in its people's abusive and susceptible ways, and the causes of these personalities? I think not, and if you compare two plays of completely different settings as I have here, the change is clearly scarce. Apart from the characters, a similarity is the central theme 'truth and lies'; because of such a huge list of differences between these two plays it's clear that this theme covers a wide range of plays. 1 ...read more.