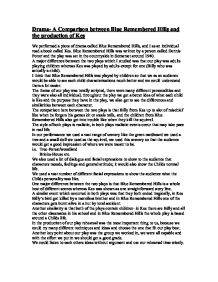 A Comparison between Blue Remembered Hills and the production of Kes.

The style of both plays is realistic, in both plays realistic events occur that may take pace in real life. In our performance we used a vast range of scenery like the green cardboard we used a tree and a small doll we used as the squirrel, we used this scenery so that the audience would get a good impression of where we were meant to be. i.e. Tree-Forest/woodland Bricks-House etc. We also used a lot of dialogue and facial expressions to show to the audience that characters moods, feelings and general attitude; it would also show the Childs normal life. We used a vast number of different facial expressions to show the audience what the Childs personality was like. ...read more.

Another similarity is that both of the plays contain children- in Kes there are Billy and all the other classmates in his school and in Blue Remembered Hills the whole play is based around a Childs life. In the production of our play rehearsal was the most important thing to us, because we could try many different techniques and ideas and choose the one that fit our play best. Another key point about our play was the group we worked in, we were all capable and with the effort we put in we should get a good grade. We could listen to each others ideas without argument and use our rehearsal time wisely. ...read more.