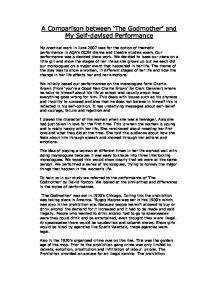 A Comparison between 'The Godmother' and My Self-devised Performance

A Comparison between 'The Godmother' and My Self-devised Performance My practical work in June 2007 was for the option of thematic performance in AQA's GCSE drama and theatre studies exam. Our performance was a devised piece work. We decided to base our piece on a little girl and show the stages of her life as she grows up but we each did our monologues on a major event that happened in her life. The theme of the play was to show a woman, in different stages of her life and how the change in her life affects her and her emotions. We initially based our performances on the monologues form Charlie Brown (from 'you're a Good Man Charlie Brown' By Clark Gensner) where he talks to himself about his life at school and usually about how everything goes wrong for him. This deals with issues such as his shyness and inability to succeed and also that he does not believe in himself this is reflected in his self-opinion. ...read more.

Also in the 1920's organised crime was on the rise. This was the golden age of the mob. Prior to the prohibition gang crime was only limited to rackets, extortion, prostitution and infiltration of labour unions. The Prohibition provided an excuse for an illegal service The prohibition provided demand for an illegal service that was too a good a money-making opportunity to pass by. Our performance is set in modern day England, this is not in the Prohibition era. In modern day England alcohol is a socially accepted drug which is used frequently and is considered to be frequent occurrence. We used how people see alcohol as a large theme in our characters monologues. We showed how alcohol affects your life and how people think that it is a way out of things but in our performance it only made things worse. We used this in our performance as we showed it in our fourth scene and there was reference to it in our third scene. ...read more.

I worked in a group with three other people. We all tried to make sure that we all played an equal part in the performance and had an equal amount of lines. However as we elaborated and improved our scripts individually that may not have been as equal as way wanted them to be. In the rehearsals I think that we did try to use the time we were given in the best way we could but we found it hard to focus for long periods of time and sometimes not use our time to the full extent that we could of to get the best out of the time we were given. Also we had problems with rehearsals as most of the time we did not have out full group, think this lack of rehearsal with the full group may have hindered our performance. Although when the group were all focused I think that we did well at being in character and remembering our lines. ...read more.