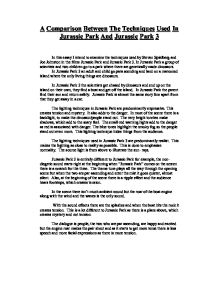 Also, at the beginning of the scene there is a ripple effect and the audience hears footsteps, which creates tension. In the scene there isn't much ambient sound but the roar of the boat engine along with the wind and the waves is the only sound. With the sound effects there are the splashes and when the boat hits the rock it creates tension. This is a lot different to Jurassic Park as there is a plane above, which creates mystery and not tension. The dialogue is people, the two who are par ascending, are happy and excited but the engine roar makes the pair shout and as it starts to get more tense there is less speech and more facial expressions as there is more tension. Steven Spielberg uses his camera shots and angles to emphasise the difference in strength between man and dinosaur. For example, at the beginning of the scene there is a low angled shot. ...read more.