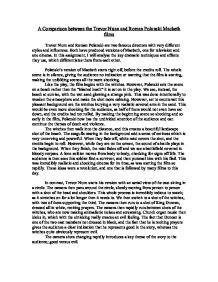 A Comparison between the Trevor Nunn and Roman Polanski Macbeth films.

A Comparison between the Trevor Nunn and Roman Polanski Macbeth films Trevor Nunn and Roman Polanski are two famous directors with very different styles and influences. Both have produced versions of Macbeth, one for television and one cinema. In this assignment, I will analyse the key dramatic techniques and effects they use, which differentiates them from each other. Polanski's version of Macbeth starts right off, before the credits roll. The whole scene is in silence, giving the audience no indication or warning that the film is starting, making the unfolding scenes all the more shocking. Like the play, the film begins with the witches. However, Polanski sets the scene on a beach rather than the "blasted heath" it is set on in the play. We see, instead, the beach at sunrise, with the wet sand glowing a strange pink. This was done intentionally to weaken the atmosphere and make the shot more calming. However, set to counteract this pleasant background are the witches burying a very realistic severed arm in the sand. This would be even more shocking for the audience, as half of them would not even have sat down, and the credits had not rolled. ...read more.

Her costume is figure hugging black, and it also blends with the backdrops, removing all the femininity from her figure, and her hair is swept back with a black head piece so she is nearly all black making her an incredibly effective Lady Macbeth. Polanski forfeits some of the eerie atmosphere by using very rich, colourful scenery throughout his film, but despite the loss of atmosphere, the film becomes far more cinematically interesting to watch. Polanski uses a lot of panoramic, long view shots, and shoots many scenes outdoors. There are very few scenes in darkness, bar the killing of Duncan, and even the opening scenes, which are perhaps the most shocking, are shot in daylight. A lot of the landscape is shot to show off the rugged, untouched beauty that the Scottish countryside has to offer. Colour filters are used to enhance the colour in some scenes. The green of the trees and the blue of the sky and most of the richest colours in the film are all enhanced. With the idyllic settings, this makes it very pleasing and easy to watch. ...read more.

He saved up his profits from the numerous "adult" movies he had produced and put them all into one project that he hoped would bring him commercial success. To ensure this, he chose how to spend his money very carefully. He chose less experienced actors, but many more visual effects and tricks that make the play a lot easier and exciting for the general public watch. He did not have enough money left over for advertising, and instead submitted it to the BBFC knowing it would cause uproar, and that he would score free publicity. He also "leaked" a few explicit stills to the press, who happily published them in the knowledge it would boost their sales, and at the same time give Polanski the coverage he needed. As a result of all his careful manipulation of the press, the film became a huge success, and Polanski gained critical acclaim and also made back the money he put in. Though Polanski used a lot of quite needless, titillating scenes to distract the audience from the fact it didn't really have very high production values, it is a much more enjoyable piece of cinema to watch then Nunn's version, and I feel that although both have their merits, it is Polanski's version that tops Nunn's for sheer entertainment and fun. ...read more.