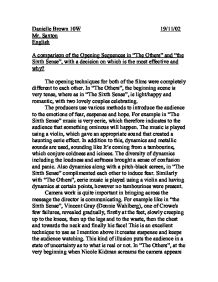 A comparison of the Opening Sequences in &quot;The Others&quot; and &quot;the Sixth Sense&quot;, with a decision on which is the most effective and why?

Danielle Brown 10W 19/11/02 Mr. Saxton English A comparison of the Opening Sequences in "The Others" and "the Sixth Sense", with a decision on which is the most effective and why? The opening techniques for both of the films were completely different to each other. In "The Others", the beginning scene is very tense, where as in "The Sixth Sense", is light/happy and romantic, with two lovely couples celebrating. The producers use various methods to introduce the audience to the emotions of fear, suspense and hope. For example in "The Sixth Sense" music is very eerie, which therefore indicates to the audience that something ominous will happen. ...read more.

This is an excellent technique to use as I mention above it creates suspense and keeps the audience watching. This kind of illusion puts the audience in a state of uncertainty as to what is real or not. In "The Others", at the very beginning when Nicole Kidman screams the camera appears to show her upright, but in reality she appeared to be lying on a bed, as the camera revealed in the following scene. This is a good way to twist the audience. Setting is an important factor that can be very effective depending on how it is presented. Both films used a house as the opening location. ...read more.

and then in the wink of an eye, the mood changes to a violent tense one, and he shoots Bruce Willis and himself. This makes the audience think that if things appear a certain way doesn't necessarily mean it's so. However in "the Others", character development I think, isn't that effective, as the character was the same dominant way throughout the opening. After analyzing both of the films, In my opinion, "The sixth Sense" has the most effective opening. I say this because at the beginning, instead of giving away the story, the audience is given a romantic and lighthearted scene, which is then dramatically shattered by a tragic one. This sets the tone for continual manipulation of the audience'' emotion by the director. ...read more.