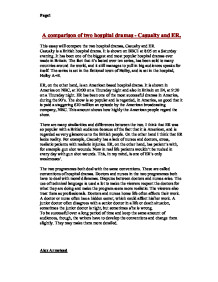 A comparison of two hospital dramas - Casualty and ER.

A comparison of two hospital dramas - Casualty and ER. This essay will compare the two hospital dramas, Casualty and ER. Casualty is a British hospital drama. It is shown on BBC1 at 8:05 on a Saturday evening .It has been one of the biggest and most popular hospital dramas ever made in Britain. The fact that it's lasted over ten series, has been sold to many countries around the world, and it still manages to pull in big audiences speaks for itself. The series is set in the fictional town of Holby, and is set in the hospital, Holby A+E. ER, on the other hand, is an American based hospital drama. It is shown in America on NBC, at 10:00 on a Thursday night and also in Britain on E4, at 9:30 on a Thursday night. ER has been one of the most successful dramas in America, during the 90's. The show is so popular and is regarded, in America, so good that it is paid a staggering �10 million an episode by the American broadcasting company, NBC. This amount shows how highly the American people regard the show. ...read more.

To pull a mix of races, the doctors and nurses, in the two shows, are of mixed race. The writers know that this will bring a bigger audience to the show. For example. If a black doctor or nurse is used, this will attract a black audience. I think that this is very successful and attracts a larger amount of people than it would if only white doctors were used. I think that it also attacks racism, and shows that there should be no racism in work places. As I have already said, both programmes deal with moral dilemmas. Such as when a doctor, in ER, had HIV+. She had a moral dilemma in that she wasn't sure to reveal her condition to her colleagues and risk her job. Or carry on working in the sense that she wasn't being truthful. This intrigues the audience. There is a massive difference between the two when it comes to adverts. ER has adverts, whereas Casualty doesn't. ER could lose a number of its audience to other channels when the break starts. In order to keep the audience the storyline has to twist or have a cliffhanger to keep the audience on the same channel and watching the program. ...read more.

I think the fact that of ER having a lot more money than Casualty rubs off on its success. And is the main reason for it being, probably, the more successful of the two. The two shows are similar in the way that appeal to a wide target audience. They both, definitely, use a fair mix of sexes. The two programmes both, also, use a mix of races. The story lines are not racist or sexist, they are child- safe also. These points mean that both programmes can aim for a big target audience. As the storylines and characters of both shows appeal to a lot of ages, the audience ages have a wide range, stretching from, most probably, eighteen to forty nine. ER uses a lot of music during the high tensely moments. This music emphasises the scenes seriousness and importance. However, Casualty uses no music apart from the starting and finishing credits. This, I feel, is one of Casualty's weakness'. Overall, I think that I have dealt with and discussed the points in this essay reasonably well. I personally think that ER is the better of the two. But then, it would have to be. The amount of money involved with ER is massive. This is one of the main reason's why the program is so good. Page1 Alex Armstead ...read more.