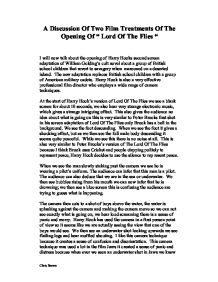 A Discussion Of Two Film Treatments Of The Opening Of &quot; Lord Of The Flies &quot;.

A Discussion Of Two Film Treatments Of The Opening Of " Lord Of The Flies " I will now talk about the opening of Harry Hooks second screen adaptation of William Golding's cult novel about a group of British school children that revert to savagery when marooned on a deserted island. The new adaptation replaces British school children with a group of American military cadets. Harry Hook is also a very effective professional film director who employs a wide range of camera techniques. At the start of Harry Hook's version of Lord Of The Flies we see a blank screen for about 10 seconds, we also hear very strange electronic music, which gives a strange intriguing effect. ...read more.

The audience can infer that this man is a pilot. The audience can also deduce that we are in the sea or underwater. We then see bubbles rising from his mouth we can now infer that he is drowning; we then see a blue screen this is confusing the audience are trying to guess what is happening. The camera then cuts to a shot of boys above the water, the water is splashing against the camera and making the camera move so we can not see exactly what is going on, we hear loud screaming there is a sense of panic and worry. Harry Hook has used the camera in a first person point of view so it seems like we are actually seeing the view that one of the boys would see. ...read more.

Then see a mid shot of a life raft then exploding open this startles the audience and explains how they survive and also what the boy was so desperate to retrieve from the water. In the next shot we see the title credits "Lord Of The Flies" on a silver and black background. And just like the Peter Brook version the letters stand out from the black background. We hear jaunty music drums, violins and flutes it has a very Irish jig feel to it, which in my opinion creates a sense of adventure and excitement. The next shot we see an extreme long shot of the island where their destination is. The raft floats onto the screen from a distance showing the survivors, who there are about twenty children and one pilot, unconscious. The boys wade ashore to where their journey begins. + In Me Chris Brown ...read more.