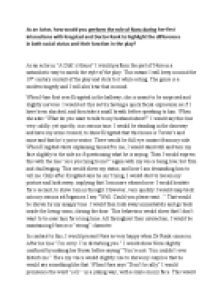 A Dolls House: How would you perform the role of Nora with Krogstad and Doctor Rank to highlight the differences in both social status and their function.

﻿As an Actor, how would you perform the role of Nora during her first interactions with Krogstad and Doctor Rank to highlight the differences in both social status and their function in the play? As an actor in ?A Doll?s House? I would perform the part of Nora in a naturalistic way to match the style of the play. This means I will keep in mind the 19th century context of the play and stick to it while acting. The genre is a modern tragedy and I will also bear that in mind. When Nora first sees Krogstad in the hallway, she is meant to be surprised and slightly nervous. I would act this out by having a quick facial expression as if I have been shocked, and then take a small breath before speaking to him. ...read more.

Then I would express this with the line ?Are you lying to me?? again with my voice being low, but firm and challenging. This would show my status, and how I am demanding him to tell me. Only after Krogstad says he isn?t lying, I would start to loosen my posture and look away, implying that I am more relaxed now. I would hesitate for a second, to show I am in thought. However, very quickly I would snap back into my serious self again as I say ?Well. Could you please wait...? That would be shown by my snappy tone. I would then look away immediately and go back inside the living room, closing the door. This behaviour would show that I don?t want to be near him for a long time. ...read more.

This would straight away make the audience think that this man who has just walked in is a friend of mine, compared to Krogstad. This would then be proved when I introduce Dr Rank to Ms Linde and refer to him as a friend. Later on when Nora says ?I?m sure you?re rather keen on living yourself,? I would say it with a big smile to show I am very comfortable around him. In conclusion, I would use a serious facial expression and tone, still and firm gait and low pitch in Nora?s interaction with Krogstad, which will show how she feels about him. In contrast, I would perform Nora to be the opposite with Dr Rank. My behaviour towards him would be playful, shown by my high pitch, happy expressions, and relaxed posture. This would highlight the differences in their social status. ...read more.