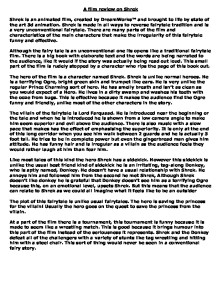 A film review on Shrek.

A film review on Shrek Shrek is an animated film, created by DreamWorks(tm) and brought to life by state of the art 3d animation. Shrek is made in all ways to reverse fairytale tradition and is a very unconventional fairytale. There are many parts of the film and characteristics of the main characters that make the irregularity of this fairytale funny and effective. Although the fairy tale is an unconventional one its opens like a traditional fairytale film. There is a big book with elaborate text and the words are being narrated to the audience, like it would if the story was actually being read out loud. This small part of the film is rudely stopped by a character who rips the page of this book out. The hero of the film is a character named Shrek. ...read more.

He tries to be in complete power but even the gingerbread man gives him attitude. He has funny hair and is irregular as a villain as the audience feels they would rather laugh at him than fear him. Like most tales of this kind the hero Shrek has a sidekick. However this sidekick is unlike the usual best friend kind of sidekick he is an irritating, tag-along Donkey, who is aptly named, Donkey. He doesn't have a usual relationship with Shrek. He annoys him and followed him from the second he met Shrek, Although Shrek doesn't like donkey he is grateful that Donkey doesn't see him as a terrifying Ogre because this, on an emotional level, upsets Shrek. But this means that the audience can relate to Shrek as we could all imagine what it feels like to be an outsider The plot of this fairytale is unlike usual fairytales. ...read more.

The princess in this story is most traditional of all the characters, she has a spell cast upon her that like most other curses that the princesses have can be cured by true loves first kiss. Her curse is hidden as she hopes to rid of it before people can find out so she decides to marry Lord Farquaad, although he is only marrying her so that he can become the king. She realises that she is in love with Shrek though. The idea of the princess falling in love with an ogre is, although unconventional a nice idea, as throughout the film the audience become to like Shrek and his irregularity. The ending of the Film is strange in that it is conventional as well as unconventional. The princess, although cured of her curse the results are the opposite of what the audience expects to see. They get married and live happily ever after..... in a Swamp ...read more.