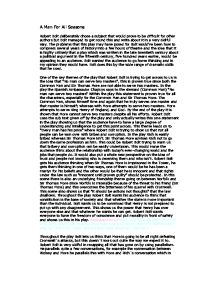 A Man For All Seasons.

A Man For All Seasons Robert Bolt deliberately chose a subject that would prove to be difficult for other authors but Bolt managed to get round this and write about it in a very skilful way. The problems that this play may have posed for Bolt would've been how to compress several years of history into a few hours of theatre and the idea that it is highly unlikely that a play which was written in the late twentieth century about a political argument in the fifteenth century, five hundred years earlier, would be appealing to an audience. Bolt wanted the audience to go home thinking and in my opinion they would have. Bolt does this by the wide range of dramatic skills that he used. One of the key themes of the play that Robert Bolt is trying to get across to us is the idea that "No man can serve two masters", this is proven true since both the Common Man and Sir Thomas More are not able to serve two masters. In the play the Spanish Ambassador Chapuys says to the steward (Common Man) "No man can serve two masters" Within the play this statement is proven true for all the characters, especially for the Common Man and Sir Thomas More. The Common Man, shows himself time and again that he truly serves one master and that master is himself; whereas with More attempts to serve two masters. ...read more.

Rich tries to flatter Norfolk for a job and Norfolk asks Sir Thomas More whether he recommends him but More just pints him out. This shows us that Sir Thomas More is very literal in his meaning of words. More always takes the meaning of words to their extremities and is a very highly educated man. More has humour and sarcasm with self-clarity and a generosity of spirit. More wants his children to be like him so he has given Meg the best possible education so that she has the best possible talent. Henry is a very extravagant and splendid character but is really a big baby. This is shown in the scene where he steers his own ship "The Great Harry". Cromwell earlier explained to the audience "he will wear in every respect a common pilot�s uniform. Except for the material, which will be a cloth of gold." In this part of story Bolt may be referring to the "Cloth of Gold" as the historical meeting to emphasise the friendship theme. Henry only cares about himself and uses his power to his advantage. He gets what he wants and doesn�t understand much else about politics. He leaves everything up to his advisors and Thomas More. The only thing that Henry put his time and effort into was his music and this is shown in the pay and we also know it to be historically correct. However in the play when we do have his music it was on one of his "passing" visits and we don�t see it we only hear it. ...read more.

This is what More said. I think this shows that More is different than the people against him. In More�s last words he said to Margaret " in matters of conscience the loyal subject is more likely to be loyal to his conscience than to any other thing". In my opinion More is a saint because he never let go of his beliefs in the law and his faith. Bolt wrote A Man for All Seasons probably without realising its relevance to modern day teenagers since teenagers need a real example of moral responsibility. We do need our heroes, saints, exemplars who live out a theory on principle. Teenagers respect risky behaviour and he tried to play it out safely. Alas Silence was not his protection. More was eminently courageous too. Bolt's play is an enduring modern classic A Man for All Seasons dramatises the conflict between King Henry VIII and Sir Thomas More. It depicts the confrontation between church and state, theology and politics, absolute power and individual freedom. Throughout the play Sir Thomas More's eloquence and endurance, his purity, saintliness and tenacity in the face of ever-growing threats to his beliefs and family, earn him status as one of modern drama's greatest tragic heroes. The play was first staged in 1960 at the Globe Theatre in London and was voted New York's Best Foreign Play in 1962. In 1966 it was made into an Academy Award-winning film by Fred Zinneman starring Paul Scofield. "A Man for All Seasons is a stark play, sparse in its narrative, sinewy in its writing, which confirms Mr Bolt as a genuine and solid playwright, a force in our awakening theatre." (Daily Mail) ...read more.