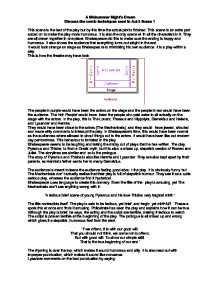 A Midsummer Night's Dream Discuss the comic techniques used in Act 5 Scene 1 This scene is the last of the play but by this time the actual plot is finished. This scene is an extra part added on to make the play more humorous. It is also the only scene with all the characters in it. They are all drawn together in one place. Shakespeare did this to make sure the ending is happy and humorous. It also shows the audience that everything turns out alright in the end. It would look strange on stage as Shakespeare is mimicking his own audience. It is a play within a play. This is how the theatre may have look: The people in purple would have been the actors on the stage and the people in red would have been the audience. The 'rich People' would have been the people who paid extra to sit actually on the stage with the actors. In the play, this is The Lovers; Theseus and Hippolyta, Demetrius and Helena, and Lysander and Hermia. They would have been close to the actors (The Mechanicals), and they would have jeered, shouted and made witty comments to interrupt the play. In Shakespeare's time, this would have been normal as the audiences where allowed to shout things out to the actors. ...read more.

'Ninny's Tomb' is more amusing and adds comedy to the scene as a Ninny is slang word for and idiot. There are other literary effect that makes the prologue sound funny. One is exaggerated alliteration. This is used quite frequently in the play. 'Whereat, with blade, with bloody, blameful blade, He bravely broach'd his boiling bloody breast' It is inappropriate and over-exaggerated. Alliteration is also over-used later on in the play by Pyramus: '...gracious, golden, glittering, gleam' When Pyramus says this, he is supposed to be thanking the moon for shining, but he is also about to discover Thisbe's clothes with blood on them. This part of the play should have been quite serious, but, the alliteration is out of place and just makes it sound humorous. The actor would probably have had trouble saying it as it is such a tongue twister. This would make it sound even funnier. There are other times in the play where inappropriate language is used by Pyramus and Thisbe. When Pyramus finds part of Thisbe's clothes, and when Thisbe finds Pyramus dead, they both make mistakes in their speeches. Pyramus calls Thisbe a 'dainty duck', which is hardly flattering. He then carries on with his dying speech. It is completely over the top and too dramatic. ...read more.

When they have a man playing the wall, it makes a speech saying that he is a wall. This blurs the lines between reality and illusion, once again. The main play is a mixture of reality, magic, dreams and illusion. This is emphasized in the play as the play is not actually real, it is an act put on for entertainment. The title of the play, A Midsummer Night's Dream, is saying that what happened in the woods was a dream, but it wasn't, it was fairies working magic and playing with the humans. Shakespeare also uses inversion. He dresses a man as a woman, again confusing reality and fantasy, but also making it humorous, like a pantomime dame. A modern director would have more opportunities than a director in Shakespeare's time. Shakespeare's theatre only had one entrance to the stage, limited props and scenery and the audience would have been right in the actor's faces, making it impossible to cover up mistakes. The director would have to make sure that the play went perfectly as the audience were not afraid to shout out if they didn't like something. A modern director also has the choice about what time period to set it in, whereas a Shakespearean director would not have this option. Shakespeare was deliberately mimicking his own audience but the modern audiences are not set out in the same way so it may not have the same effect. ...read more.