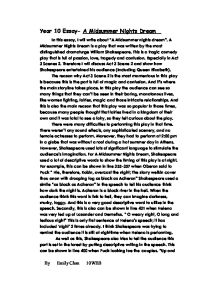 A Midsummer Nights Dream is a play that was written by the most distinguished dramaturge William Shakespeare. This is a tragic comedy play that is full of passion, love, tragedy and confusion. Especially in Act 3 Scenes 2.

Year 10 Essay- A Midsummer Nights Dream In this essay, I will write about "A Midsummer nights dream". A Midsummer Nights Dream is a play that was written by the most distinguished dramaturge William Shakespeare. This is a tragic comedy play that is full of passion, love, tragedy and confusion. Especially in Act 3 Scenes 2. Therefore I will discuss Act 3 Scene 2 and show how Shakespeare entertained his audience (Including Queen Elizabeth). The reason why Act 3 Scene 2 is the most momentous in this play is because this is the part is full of magic and confusion. And it's where the main storyline takes place. In this play the audience can see so many things that they can't be seen in their boring, monotonous lives, like women fighting, fairies, magic and those intricate relationships. And this is also the main reason that this play was so popular in those times, because many people thought that fairies lived in a kingdom of their own and it was fatal to see a fairy, so they felt curious about the play. There were many difficulties to performing this play in that time. There weren't any sound effects, any sophisticated scenery, and no female actresses to perform. ...read more.

He used dramatis irony, magical spell, and alliteration in the speech. Even when the fairies were face to face with humans, the humans pretended not to see the fairies. For instance, there is dramatic irony shown in line 50 when Hermia is saying how much Lasander loves her. "The sun was not so true, unto the day as he to me". This has used a simile to create irony which will makes this more thrilling to the audience. As well as this, Shakespeare used many enchanting words to make this scene more magical, fascinating and imaginary. This can be seen in line 100 when Puck has to go to put everything back right. "I go, I go, look how I go, swifter than a arrow from the tartars bow". This speech is rhyme with the same word 'go' three times. It is like a magical spell which will cause the audience very interesting because they have never heard the way that fairies speak before. Thirdly, Shakespeare put many words that full of powerful, strapping meaning in each character's speech to show clearly the characteristic to the audience. In the play, Puck is very respect, honour his lord Oberon. ...read more.

When Demetrius say this to Helena, the audience will know is the affect of the love juice immediately. So, the audience will find it really funny and fascinating because the actors don't know whats happening. This speech used lots of descriptive words to make it more exaggerative which will be more humorous, laughable. Shakespeare uses many methods to entertain his audience. And one of the methods was alliteration, this can be shown in line 269-270 when Lysander saying how much he hat Hermia. "What should I hurt, strike her, kill her dead? Although I hate her, I'll not harm her so." Shakespeare used alliteration to express the feelings inside Lasander on how much he hates Hermia. This is a very good way to show the character feelings to the audience. In my opinion, although I think the modern theatre is more interesting than the play in 1599. I think Shakespeare use many clever ways to make his play interesting to the audience because there aren't any equipment, technology to help. He can use his fascinating descriptive writing to make the audience imagine, visualize. Even the Queen loves it as well. The reason I think modern theatre is better is because they have sound effects, female actors. Therefore, it will be very clear on whats happening to the audience and they wont have to imagine. ?? ?? ?? ?? By Emily Chan 10WEB ...read more.