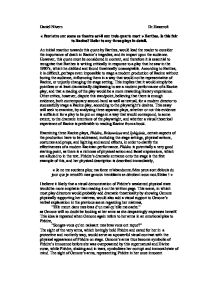 Daniel Nivern Dr.Hawcroft " Peut etre sur scene ce theatre est-il aux trois quarts mort " Barthes. Is this fair to Racine? Refer to any three plays in detail. An initial reaction towards this quote by Barthes, would lead the reader to consider the importance of death in Racine's tragedies, and its impact upon the audience. However, this quote must be considered in context, and therefore it is essential to recognize that Barthes is writing critically in response to a play that he saw in the 1980's, which he disliked and found theatrically unacceptable. According to Barthes, it is difficult, perhaps even impossible to stage a modern production of Racine without boring the audience, influencing them in a way that would not be representative of Racine, or unjustly changing the stage setting. This implies that it would simply be pointless or at least dramatically displeasing to see a modern performance of a Racine play, and that a reading of the play would be a more rewarding literary experience. Other critics, however, dispute this standpoint, believing that there is enough evidence, both contemporary second-hand as well as textual, for a modern director to successfully stage a Racine play, according to the playwright's desires. This essay will seek to examine, by analysing three separate plays, whether or not this evidence is sufficient for a play to be put on stage in a way that would correspond, to some extent, to the dramatic intentions of the playwright, and whether a visual theatrical experience of Racine is preferable to reading Racine from a book. ...read more.

She also demonstrates her shameful passion by her uncontrollable blushing, which she explains to Oenone is a way of hiding her face, "Oenone, la rougeur me couvre le visage." When she thinks about her passion for Hipployte, she also has a physical reaction, "Je le vis, je rougis, je p�lis � sa vue," These examples of blushing, as a visual way of representing emotions of passion and shame, contrast with a presumable example of Ph�dre going pale when she actually sees Hippolyte, "Le voici. Vers mon Coeur tout mon sang se retire." Perhaps the most dramatic of these physical actions, which one can interpret from the text, is the way in which Ph�dre points her chest as she powerfully demands that Hippolyte stab her. "Voil� mon coeur: c'est l� que ta main doit frapper," Upon the word "l�" one can envisage a visually dramatic moment, as Ph�dre angrily and desperately points to her heart, begging the man she loves to end her torment. A significant feature in modern theatre productions is the use of lighting, which can be symbolic of the action on the stage. The visual aspect of lighting could also heavily influence 17th Century French productions, with the use of candles to add extra or less light to the stage. As was touched upon earlier with Ph�dre's line "Mes yeux sont �blouis du jour que je revoi," the notions of light and darkness in Ph�dre are extremely important. Ph�dre is suffering from melancholy, coming from the Greek melankholia, and which is a disease, in which a character becomes gloomy and depressed as a result of too much black bile. ...read more.

This ensures richness of dramatic action, including suspense and a potential for both pity and fear. Will Junie be caught making secret signs to Britannicus? If so, will he understand such signals and how will he react? What would therefore be the consequences? Only the spectator can see whether or not she makes these expressions and indeed if she is trying to deliberately not make such expressions, and this adds extra suspense to Racine on stage, contrasting sharply with Barthes negative view of modern Racinian productions. There is a strong emphasis on a visual reading of the play and the word "yeux" is repeated as evidence. Junie, referring to the hidden presence of N�ro, explains to Britannicus that "Vous �tes en des lieux tout pleins de sa puissance. Ces murs m�mes, Seigneur, peuvent avoir des yeux, Et jamais l'empereur n'est absent de ces lieux." In response to this, a few lines later, Britannicus replies that Junie has now learnt to control her facial expressions, which is possibly a subtle Racinian allusion to the ability of the actor to change his facial expressions to convey different a change of emotion. He states, "Quoi! M�me vos regards ont appris � se taire? Que vois-je? Vous craignez de rencontrer mes yeux? demonstrating the ruthless, expressionless way in which she is responding to his conversation. This would be tense and emotional when seen on stage. In the play Iphig�nie, Racine and Michel Laurent specify the setting of the stage and the scenery, thus allowing a modern director to have a strong idea of how it should be presented. ...read more.