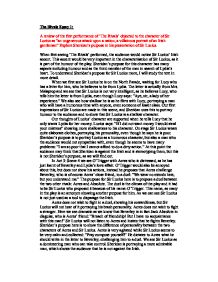 A review of the first performance of 'The Rivals' objected to the character of Sir Lucius as &quot;an ungenerous attack upon a nation, a villainous portrait of an Irish gentleman&quot; Explore Sheridan's purpose in his presentation of Sir Lucius.

The Rivals Essay 1: A review of the first performance of 'The Rivals' objected to the character of Sir Lucius as "an ungenerous attack upon a nation, a villainous portrait of an Irish gentleman" Explore Sheridan's purpose in his presentation of Sir Lucius. When first seeing 'The Rivals' performed, the audience would notice Sir Lucius' Irish accent. This accent would be very important in the characterisation of Sir Lucius, as it is part of the humour of the play. Sheridan's purpose for this character has many aspects including humour and as the third member of the men in search of Lydia's heart. To understand Sheridan's purpose for Sir Lucius more, I will study the text in more detail. When we first see Sir Lucius he is on the North Parade, waiting for Lucy who has a letter for him, who he believes to be from Lydia. The letter is actually from Mrs. Malaprop and we see that Sir Lucius is not very intelligent, as he believes Lucy, who tells him the letter is from Lydia, even though Lucy says: "Aye, sir, a lady of her experience." ...read more.

The duel is the climax of the play and it had to be Sir Lucius who proposed it because of his name: O'Trigger. This name, as many in the play is an antonym showing another purpose for him. As we can see Sir Lucius is not just used as a tool to disparage the Irish. Acres does not wish to fight in a duel, showing his cowardliness, but Sir Lucius will not hear of it portraying his brash personality. Acres does not wish to fight a stranger. Here we see dramatic as we know that Beverley is in fact Jack Absolute in disguise, who is Acres' friend: "Breach of friendship! But I have no acquaintance with this man!" Sir Lucius will not listen to Acres and insists that he fights Beverley. Sheridan's purpose here is to show the difference of personality between the two characters of Acres and Sir Lucius. Acres is very agitated while Sir Lucius seems to be very calm and collected: "Pray compose yourself!" ...read more.

The audience would find this humorous, as Acres would become even more worried about the duel than he already is. Sheridan's main purpose for Sir Lucius, in this scene, is to provide humour, but also to encourage Acres to take part in the duel. He wants to portray Sir Lucius as a confident man who is brave and not afraid of a challenge. As we have seen, Sheridan's purpose for Sir Lucius is not to disparage the Irish. I would not agree that the portrayal of Sir Lucius is an 'ungenerous attack upon a nation', but I do not think that Sheridan portrays the Irish as a kind, caring country. Sheridan's main purpose for this character is to portray humour as he does in his scenes with Acres, but he also adds to the plot by creating a third member of the rivals for Lydia's heart, but also proposing the duel, which is the climax of the play. Sir Lucius would not be the audience's favourite character, as he is shallow and not very intelligent, but Sheridan has not made him an extremely unlikeable character. ...read more.