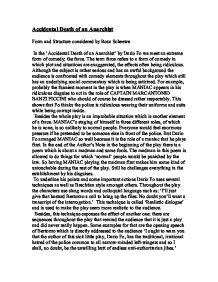 Accidental Death of an Anarchist - Form and Structure

Accidental Death of an Anarchist Form and Structure considered by Rosa Scheewe In the 'Accidental Death of an Anarchist' by Dario Fo we meet an extreme form of comedy; the farce. The term farce refers to a form of comedy in which plot and situations are exaggerated, the effects often being ridiculous. Although the subject is rather serious and has an awful background the audience is confronted with comedy elements throughout the play which still has an underlying social commentary which is being satirized. For example, probably the funniest moment in the play is when MANIAC appears in his ridiculous disguise to act in the role of CAPTAIN MARCANTONIO BANZI PICCINI who should of course be dressed rather respectably. This shows that Fo thinks the police is ridiculous wearing their uniforms and suits while being corrupt inside. Besides the whole play is an improbable situation which is another element of a farce. MANIAC's staging of himself in three different roles, of which he is none, is so unlikely to normal people. ...read more.

This technique is called 'Realistic dialogue' and is used to make the play seem more realistic to the audience. Besides, this technique espouses the effect of another one: there are sequences throughout the play that remind the audience that it is just a play and did never really happen. Some examples for that are the opening speech of Bertozzo which is directly addressed to the audience 'I ought to warn you that the author of this sick little play, Dario Fo, has the traditional, irrational hatred of the police common to all narrow-minded left-wingers and so I shall, no doubt, be the unwilling butt of endless anti-authoritarian jibes.' We can also find a break from the script towards the end and the effect of this technique doubles because of the 'Realistic dialogue' and really catches the audience. Another important fact is the choice of the audience of two different endings. However they decide: 'evil' will always win which is a sign for Fo's opinion that we live in an unjust world. ...read more.

The other time the phone interrupts the pause that is created after SUPERINTENDENT admits that he threw the anarchist out of the window. It might indicate that the police cannot help themselves out of a dangerous situation on their own, they are not trained for that and rely on someone else. Besides, the telephone ring introduces a new character: FELETTI. In contrast to the tension in the play the use of songs is meant to relieve the audience a bit just to catch them again because as soon as you start laughing about anything something horrible happens or is said, which is another Farcial element. As well as two endings the play has got two Acts and three scenes. It is a quite linear play indicating the order of the police but something is wrong as there is one scene in the first act and two scenes in the second one. They are not portioned equally because they cannot be; we live in an unjust world if you would like to remember. ...read more.