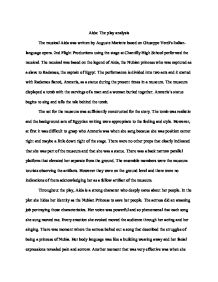 Aida: The play analysis The musical Aida was written by Auguste Mariette based on Giuseppe Verdi's Italian-language opera. 2nd Flight Productions using the stage at Chantilly High School performed the musical. The musical was based on the legend of Aida, the Nubian princess who was captured as a slave to Radames, the captain of Egypt. The performance is divided into two acts and it started with Radames fianc�, Amneris, as a statue during the present times in a museum. The museum displayed a tomb with the carvings of a man and a woman buried together. Amneris's statue begins to sing and tells the tale behind the tomb. The set for the museum was sufficiently constructed for the story. The tomb was realistic and the background sets of Egyptian writing were appropriate to the feeling and style. However, at first it was difficult to grasp who Amneris was when she sang because she was position center right and maybe a little down right of the stage. ...read more.

Her body language was like a building wearing away and her facial expressions revealed pain and sorrow. Another moment that was very effective was when she finally accepted her love for Radames. Her body language was playful, her voice was light and her facial expression was soft and more youthful. She was the best and most excellent actress in the play. The lighting had its good effects and bad effects. During serious moments, the lighting was used well and isolated the light towards the main characters. However, when the music became lively, the lighting was in all different colors, similar to a disco lighting, which I found unnecessary and sloppy for a historical musical. The costuming was decent as well but I expected more from a community theatre company. The costumes would be acceptable for a high school production but not a community one. ...read more.

The dances seemed a little parallel and conformed to the same movements at times. The ensemble men were Radames soldiers in the beginning and did a dance routine that had the characteristics of a march. The performance of the ensemble however, was poor. Their entire routine was not in synch and it was sloppy. In order to portray as soldiers, they should have had more cut and dry movements that were sharp and strict. However, they performed as if they were relaxed and bored. It was more of a casual walk than a march. Towards the end the soldiers did an impressive break dance when the song lifted from its austere melody, however I found it unnecessary. Overall the musical was satisfactory as a community musical. The background music was appropriate, the main actors were excellent in portraying their characters and the songs were sung on key. Although there were many errors in setting, and ensemble members, the director succeeded in telling and portraying the story of Aida in a reasonable fashion. ...read more.