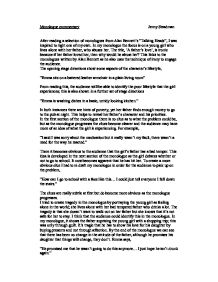 Monologue commentary Jenny Steadman After reading a selection of monologues from Alan Bennett's "Talking Heads", I was inspired to right one of my own. In my monologue the focus is on a young girl who lives alone with her father, who abuses her. The title, 'A father's love', is ironic because if her father loved her, then why would he abuse her? This links to the monologues written by Alan Bennett as he also uses the technique of irony to engage the audience. The opening stage directions show some aspects of the character's lifestyle, "Emma sits on a battered leather armchair in a plain living room" From reading this, the audience will be able to identify the poor lifestyle that ...read more.

There it becomes obvious to the audience that the girl's father has a bad temper. This idea is developed in the next section of the monologue as the girl debates whether or not to go to school. It now becomes apparent that he has hit her. To create a more obvious clue I had to re draft my monologue in order for the audience to pick up on the problem, "How can I go to school with a face like this... I could just tell everyone I fell down the stairs." The clues are really subtle at first but do become more obvious as the monologue progresses. ...read more.

Emma says, "He promised me that he wasn't going to do this anymore... I just hope he isn't drunk again." This demonstrates her fear of her father. The last set of stage directions shows that the girl is frightened and that her father hasn't changed. The young girl knows what is going to happen when her father comes home. "A door slams and a man is heard shouting from off stage... He's home! (Frightened)" I have tried to end my monologue on a tragic note, but leave the audience in suspense. It shows that the father has broke his promise and come in drunk again, but there is no indication as to whether he will beat his daughter. ...read more.