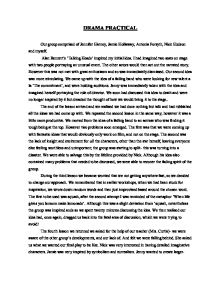 DRAMA PRACTICAL Our group comprised of Jennifer Harney, Jamie Hollaway, Antonia Forsyth, Nick Hudson and myself. Alan Bennett's 'Talking Heads' inspired my initial idea. I had imagined two seats on stage with two people portraying an unusual event. The other actors would then act out the narrated story. However this was not met with great enthusiasm and so was immediately dismissed. Our second idea was more stimulating. We came up with the idea of a failing band who were looking for new talent a la 'The commitment', and were holding auditions. Jenny was immediately taken with the idea and imagined herself portraying the role of director. We soon had discussed this idea to death and were no longer inspired by it but dreaded the thought of how we would bring it to the stage.. The end of the lesson arrived and we realised we had done nothing but talk and had rubbished all the ideas we had come up with. We repeated the second lesson in the same way, however it was a little more productive. We moved from the idea of a failing band to an actress who was finding it tough being at the top. However two problems soon emerged. The first was that we were coming up with fantastic ideas that would obviously only work on film, and not on the stage. The second was the lack of insight and excitement for all the characters, other than the star herself, leaving everyone else feeling worthless and unimportant; the group was starting to split- this was turning into a disaster. We were able to salvage this by the lifeline provided by Nick. Although his idea also contained many problems that needed to be discussed, we were able to recover the fading spirit of the group. During the third lesson we became worried that we not getting anywhere fast, so we decided to change our approach. ...read more.

This idea was still a little too outlandish so we toned it down to something more simplistic. We thought that if we were more subtle it would allow the audience the opportunity to understand the message behind the plot, thus keeping them entertained. As the play progresses Antonia's character and mine would imagine more outrageous events and so really inviting the audience to enter the world that we have created. However these events would still be simple enough to leave the audience asking themselves whether it was just coincidence, or our imaginations. We thought about the possibility of running each scene through twice. Our intention was to demonstrate to the audience the different versions of events; the 'real world' and our fantasies. We realised, however, that this would leave little opportunity for the audience to reflect on what was happening. We were delighted by this new dimension and felt that in a way it incorporated the idea of the imperfection sketch, as it played around with the idea of everyday life being monotonous and the power of the individual to manipulate 'real life' events. I was pleased that this incorporated my concept of the 'cartoon' sketch. The initial idea of each personality was discussed as a group then it was our individual effort that determined how complex our character turned out. We obtained these initial ideas, of our characters, by interviewing each other about our home and school lives. We all felt that characters our own age would be best, as we would be able to play these more realistically and with some understanding. Antonia and Nick were still feeling that their characters were a little lacking in depth. I thought it might be a good idea if, as we had already established that they were from single parent families, they were stepsiblings. This meant adding in small phrases here and there to indicate there was some sibling rivalry. ...read more.

Jamie had to run about asking the porters and members of staff to obtain the necessities of our set, he also dealt with all of the props. I seemed to slip into the role of organiser. I had the budget and was the keeper of the script. I also arranged when and where the rehearsals were. I am a very bossy person and for once this attribute of mine was put to good use. I also sorted out the very last minute programme, however it went down very well with the audience (well, my parents, anyway!). Antonia had the most important job. It was her job to bring food and drink to each rehearsal, without which our play would never have been finished, our ten minutely breaks were vital in the structure of our work. Most of our fifty pound budget went towards the purchase of costumes. For the three weeks proceeding the production we became regulars at the local charity shops, to such an extent that, when we finally purchased our clothes, the relieved shop assistant admitted that she had been worried that we were 'casing the joint'! As with most productions, now that it is over, it seems to have been a little bit of an anti-climax. However, I have thoroughly enjoyed most of the ups and downs including the run up to and the actual performance. The most important thing that I have taken away from this experience is that I have begun to question myself. I love the theatre and this has never been more apparent than over the past few weeks. It has been a hard process, at times the stresses have caused divisions to develop, but throughout the whole experience my enthusiasm and excitement never faltered. I have learnt more important lessons than just, voice projection, how to block scenes and how to think about set, lighting and music. I have learned how to work in a group and to take advantage of other's strengths and mine, and become aware of how to deal with our weaknesses. ...read more.