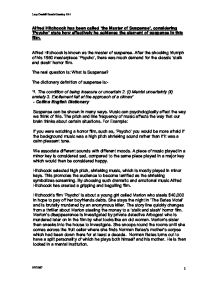 Alfred Hitchcock has been called 'the Master of Suspense', considering 'Psycho' state how effectively he achieves the element of suspense in this film.

Alfred Hitchcock has been called 'the Master of Suspense', considering 'Psycho' state how effectively he achieves the element of suspense in this film. Alfred Hitchcock is known as the master of suspense. After the shocking triumph of his 1960 masterpiece 'Psycho', there was much demand for the classic 'stalk and slash' horror film. The real question is: What is Suspense? The dictionary definition of suspense is:- '1. The condition of being insecure or uncertain 2. (i) Mental uncertainty (ii) anxiety 3. Excitement felt at the approach of a climax' - Collins English Dictionary Suspense can be shown in many ways. Music can psychologically affect the way we think of this. The pitch and line frequency of music affects the way that our brain thinks about certain situations. For Example: If you were watching a horror film, such as, 'Psycho' you would be more afraid if the background music was a high pitch shrieking sound rather than if it was a calm pleasant tune. We associate different sounds with different moods. A piece of music played in a minor key is considered sad, compared to the same piece played in a major key which would then be considered happy. Hitchcock selected high pitch, shrieking music, which is mostly played in minor keys. This promotes the audience to become terrified as the shrieking symbolizes screaming. By choosing such dramatic and emotional music Alfred Hitchcock has created a gripping and beguiling film. Hitchcock's film 'Psycho' is about a young girl called Marion who steals $40,000 in hope to pay off her boyfriends debts. She stays the night in 'The Bates Motel' and is brutally murdered by an anonymous killer. The story line quickly changes from a thriller about Marion stealing the money to a 'stalk and slash' horror film. Marion's disappearance is investigated by private detective Arbogast who is murdered later on in the film by what looks like an old woman. ...read more.

This effect creates an enormous amount of suspense for the audience. The shrieking music yet again adds to the feeling of suspense that is created during the scene. Throughout the scene the killers face remains carefully concealed thus increasing fear and suspense as the true nature of the scene is left in the audience's imagination. During the footage each cut of the knife seems to coincide with cut in the film. The effect of this on the audience is intriguing. It draws the audience into the film thus creating a visual effect on the viewers mind. Hitchcock's intention for the shower scene was to suggest and not to show. During the stabbing incident you never actually see the victim (Marion) being stabbed. You assume that she is being stabbed due to the movement of the knife and the blood dripping in the bath and the stabbing sound, which is actually a knife being stabbed into a melon. '...and not an actual bare breast or plunging knife is to be found in the final cut, just illusion through montage.' - The Hitchcock Collection Hitchcock used thousands of different camera shots. In Arbogast's murder he used a High Angle shot when the killer approached Arbogast and murdered him; this stopped the audience seeing the killers face, making the scene more exciting and intriguing. When Arbogast is walking up the hill towards the house, the background music continuously goes up an octave each one or two steps he takes up the hill. This effect simulates walking. You could listen to the film and not watch it and still know that there was a ascending camera shot.. Hitchcock had to make the house and the surroundings look disturbing in order to convince the audience that the film and the overall setting is disturbing. The weather coincides with the setting and the mood of the act. Each time when something grim or bad was about to happen, it would either rain or a storm could be heard in the background. ...read more.

Hitchcock had a hanging camera follow Norman up the stairs, and when he went into the room he continued going up without a cut. As the camera was raised to the top of the door, it was turned and shot back down the stairs again. Meanwhile, an argument was taking place between the son and his mother to distract the audience and take their minds off what the camera was doing. In this way the camera was above Norman as he carried his mother back down the stairs and the public did not notice a thing. It is excites Hitchcock to use the camera to deceive the audience. The scene in which Marion's sister, Lila, discovers Norman's mothers' body in the cellar is a key scene and an element to the build up of suspense for the final scene. The build up to this scene is very intense. The audience is shown all of Norman's childhood memories and thoughts. You then are taken down into the fruit cellar where they hear the shrieking and squawking of birds. The camera then turns and goes to a back view of Norman Bates' mother. Lila approaches the figure and it spins round to reveal a skeleton of an old woman. As Lila backs up she turns and knocks the light on the ceiling. This swings back and forth casting shadows around the room. This creates a shocking and puzzling effect to the audiences mind. It becomes almost impossible to focus on single objects as the light deceives the eyes of the audience into thinking that everything is moving around. I conclude that Hitchcock is the master of suspense due to his tremendous efforts and expertise that have made 'Psycho' such a masterpiece and a classic. He used all the available sources and elements needed to make the film so great. He used manual effects to create and sustain the suspense throughout the film, unlike today's directors who rely on technologically generated effects. Lucy Dunhill South-Hunsley 10-1 1 5/5/2007 ...read more.