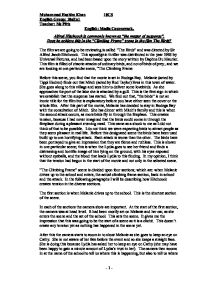 Alfred Hitchcock is commonly known as &quot;the master of suspense&quot;. Does he achieve this in the &quot;Climbing Frame&quot; scene in the film The Birds?

Alfred Hitchcock is commonly known as "the master of suspense". Does he achieve this in the "Climbing Frame" scene in the film The Birds? The film we are going to be reviewing is called "The Birds" and was directed by Sir Alfred Jacob Hitchcock. This apocalyptic thriller was distributed in the year 1963 by Universal Pictures, and had been based upon the story written by Daphne Du Maurier. This film is filled of chaotic attacks of ordinary birds, and not of birds of prey, and we are looking at one particular scene, "The Climbing Frame Before this scene, you find that the movie is set in Bodega Bay. Melanie (acted by Tippi Hedren) finds out that Mitch (acted by Rod Taylor) lives in this town of water. She goes along to this village and sees him to deliver some lovebirds. As she approaches the port of the lake she is attacked by a gull. This is the first sign in which we establish that the suspense has started. We find out that, "the birds" is not an ironic title for the film but is explanatory before you have either seen the cover or the whole film. After this part of the movie, Melanie has decided to stay in Bodega Bay with the consultation of Mitch. She has dinner with Mitch's family and this is when the second attack occurs, as more birds fly in through the fireplace. This creates tension, because I had never imagined that the birds could come in through the fireplace during a pleasant evening meal. ...read more.

It may be that she is worried about Cathy as she persists at glancing at the window of the school's classroom. Occasionally, there were one or two close-ups on the birds as they arrived on to the scene. This may have been done to give the audience a visual image of what is going to happen. This was used to create tension because it was almost a two featured section. This is because you would see Melanie and then the birds, and this would happen two or three times. It is a contrast between the good and evil. It is almost as if you find a mammal to bird comparison. They are both the focus of the section. The roaming shot is the next shot that we see; as we find that it follows what is going on from Melanie's perspective. She finds that something must be wrong and for one of the first times she is observant of her surroundings, and as she sees one of them it leads her to all of the other birds. This creates tension and suspense because the audience may have been wondering "What is going to happen next?" You see this image and this is when there is a slight pause in proceedings but then she runs up to the school in shock. Also you feel as though you are watching this happen to you and so it worries you a bit. A fixed shot is used as Melanie moves towards the school after she realises where the bird she had previously followed went, she goes in to the school. ...read more.

This is because she went for cover in the car nearby and then lowered her head to touch the steering wheel. This shows that she was relieved when it was over. Three people were in that car, Cathy who was crying, her friend who was also crying and Melanie who tried to get rid of these birds by beeping the horn. This is what causes the birds to vanish off as they go in the same direction as the other children had. I also noticed that they fly off to where the next incident happens. This could lead you to suspicions of what could happen in the next scene. I think that Alfred Hitchcock does effectively create suspense by using the method of creating the 'good versus evil' effect. He also creates it so that it seems as though you are on a rollercoaster ride and so it builds up and as it slows down the pulse is up again. Using birds to create this suspense is good as you feel as though it could happen to anyone and even you! A modern audience would not feel the suspense as they may be distracted by the fake graphics, and the fake scenery, although it is an old film. I think it is a great film in the way of portraying the way in which you should create the tension and the suspense. Also, when you get to the end of the film then you want to now what is going to happen next. It keeps you wanting more. You can ask yourself questions like "Are they going to attack again?" Muhammed Hashim Khan 10CS English Group: 10aEn1 Teacher: Ms Pitts English: Media Coursework. - 1 - ...read more.