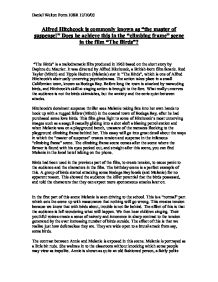 Alfred Hitchcock is commonly known as &quot;the master of suspense!&quot; - does he achieve this in the &quot;climbing frame&quot; scene in the film &quot;The Birds&quot;?

Alfred Hitchcock is commonly known as "the master of suspense!" Does he achieve this in the "climbing frame" scene in the film "The Birds"? "The Birds" is a melodramatic film produced in 1963 based on the short story by Daphne du Maurier. It was directed by Alfred Hitchcock, a British-born film fanatic. Rod Taylor (Mitch) and Tippie Hedren (Melanie) star in "The Birds", which is one of Alfred Hitchcock's abstrusely unnerving psychodramas. The action takes place in a small Californian town, known as Bodega Bay. Before long the town is attacked by marauding birds, and Hitchcock's skill at staging action is brought to the fore. What really unnerves the audience is not the birds skirmishes, but the anxiety and the eerie quiet between attacks. Hitchcock's dominant suspense thriller sees Melanie taking fate into her own hands to hook up with a rugged fellow (Mitch) in the coastal town of Bodega Bay, after he had purchased some love birds. This film gives light to some of Hitchcock's most unnerving images such as a seagull casually gliding into a shot aloft a blazing petrol station and when Melanie was on a playground bench, unaware of the menaces flocking to the playground climbing frame behind her. This essay will go into great detail about the ways in which the "master of suspense" creates tension and suspense in the infamous "climbing frame" scene. ...read more.

The children cannot see the birds because as the audience already knows, there is a wall between the children and the birds, which obstructs their view. This is another inclusion of dramatic irony. The effect of this is that we realize the children will probably not escape unharmed. This creates tension because their future is in doubt. Melanie then goes back into the school to tell Annie what is wrong. Another contrast between the two is shown, how they reacted under pressure. Melanie is quite calm and collective, obviously trying to keep hold of the situation. Annie, on the other hand, was perceived as a little bit hysterical. She took a glance out the window and judging by the expression on her face, she was quite distraught. Annie then told the children to show Melanie how good they are at practicing a fire drill. That was a decoy; there was no fire drill, just a group of vicious crows in close proximity to them. She did not want to tell the children the truth because she would have created panic. This makes the audience anxious and tense. Tension is created because the audience realizes that the children have little chance that they will come out of this ordeal unharmed. This is because they know the crows are there and the children do not. This is one more inclusion of dramatic irony. ...read more.

He kept the gathering of the crows quiet to build up the suspense and to keep the characters at high risk from a bombardment. Then and only when there were scores of crows did they make a noise, but by then it was too late to walk away without being attacked from the sinister crows. The birds seemed particularly frightening in this film. They psychologically affected you. It played on your mind. Birds do not normally strike fear into people's eyes. You would not normally walk down the street, see a bird and quake in your boots. However, I can imagine after watching this film, some people may be a little panic-stricken if they saw a group of crows flying over their heads! The audience must believe that if it can happen to a bunch of people in Bodega Bay, then it can happen to then. Alfred Hitchcock deserves credit because he has made a relatively "nice" group of animals feared by a lot of people using this film. A modern audience would react far differently then an audience of the sixties would, watching the film when it first came out. You have to realize that the "cutting edge technology" used in "The Birds" is pretty primitive by today's standards. When the film first came out, the audiences were not "immune" to the graphic violence that we would now call "tame" by today's standards, they were not used to seeing horrific violence in that much detail. Daniel Welton Form 10BR 12/10/03 ...read more.