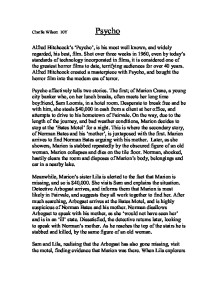 Alfred Hitchcock's 'Psycho', is his most well known, and widely regarded, his best, film.

Charlie Wilson 10Y Psycho Alfred Hitchcock's 'Psycho', is his most well known, and widely regarded, his best, film. Shot over three weeks in 1960, even by today's standards of technology incorporated in films, it is considered one of the greatest horror films to date, terrifying audiences for over 40 years. Alfred Hitchcock created a masterpiece with Psycho, and bought the horror film into the modern era of terror. Psycho effectively tells two stories. The first; of Marion Crane, a young city banker who, on her lunch breaks, often meets her long time boyfriend, Sam Loomis, in a hotel room. Desperate to break free and be with him, she steals $40,000 in cash from a client at her office, and attempts to drive to his hometown of Fairvale. On the way, due to the length of the journey, and bad weather conditions, Marion decides to stop at the 'Bates Motel' for a night. This is where the secondary story, of Norman Bates and his 'mother', is juxtaposed with the first. Marion arrives to find Norman Bates arguing with his mother. Later, as she showers, Marion is stabbed repeatedly by the obscured figure of an old woman. Marion collapses and dies on the tile floor. Norman, shocked, hastily clears the room and disposes of Marion's body, belongings and car in a nearby lake. ...read more.

The horrifying ending provides an unexpected twist to the plot, and the way the various stories are cleverly resolved at the end make for a satisfying conclusion. The real magic, however, is the way in which Hitchcock creates the real horror of the film in the mind of the reader. There are only two incidences of violent death, those of Marion and Arbogast, the real terror is in the viewer not knowing what will occur next, and who else may be murdered. In this way great suspense is created, and Hitchcock tells of how he attempted to "Manipulate the minds of the audience, and make them think they've seen something which has only been suggested". He plays with the audience's emotions, drawing them into the film, and progressively asking them to identify and sympathise with different characters as the story progresses. Psycho was based on the novel of the same name by Robert Bloch, based on a real-life psychotic killer, Edward Gein. During filming, Psycho was known as 'Production 9401', and due to a lack of funds, Hitchcock used his own television crew; saving him time any money. The result was a scheduled 30-day shoot costing between $800,000 and $900,000. To date the film has grossed over $40 million. ...read more.

When Lila explores the house, she finds Mrs. Bates's skeleton in the fruit cellar. As a response to her screams, Norman rushes in, dressed as his mother and wielding a knife, but is detained by Sam. In the courthouse, a psychiatrist explains that Norman incorporated his mother's personality into his own after murdering her and her lover. Norman, meanwhile, sits in a straightjacket, his mother's personality completely overtaking his own. "Psycho," starts off from the point-of-view of Marion Crane (Janet Leigh), a young banker who, on her lunch breaks, often meets her long-time boyfriend, Sam Loomis (John Gavin), in a hotel room. Desperate to break free and be with him, she steals $40,000 in cash and goes on the lam, only to stop at the backwoods Bates Motel for the night, where, as everyone knows, she meets her ill-fated demise by being stabbed to death in the shower by a mysterious female figure. When the motel manager, Norman Bates (Anthony Perkins), whose invalid mother is always looking out the bedroom window of the house overlooking the motel, discovers Marion, he desperately disposes of the body by putting her in the trunk of her car and driving it into a nearby swamp. After missing for a week, Marion's older sister, Lila (Vera Miles), grows concerned and enlists the aid of both Sam and the police detective, Arbogast (Martin Balsam), to investigate the disappearance 'Juxtaposed' ...read more.