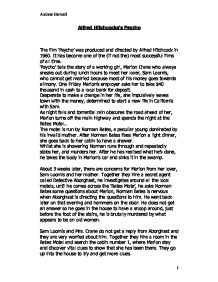 Alfred Hitchcocks's Psycho The film 'Psycho' was produced and directed by Alfred Hitchcock in 1960. It has become one of the (if not the) most successful films of all time. 'Psycho' tells the story of a working girl, Marion Crane who always sneaks out during lunch hours to meet her lover, Sam Loomis, who cannot get married because most of his money goes towards alimony. One Friday Marion's employer asks her to take $40 thousand in cash to a local bank for deposit. Desperate to make a change in her life, she impulsively leaves town with the money, determined to start a new life in California with Sam. As night falls and torrential rain obscures the road ahead of her, Marion turns off the main highway and spends the night at the Bates Motel... The motel is run by Norman Bates, a peculiar young dominated by his invalid mother. After Norman Bates fixes Marion a light dinner, she goes back to her cabin to have a shower. ...read more.

They go up into the house to try and get more clues. Sam keeps Norman Bates happy whilst Mrs Crane goes to investigate in the house. But she has been gone a while, nearly half an hour now and Norman notices that. He goes back in the house, dresses up as a woman and begins to hunt for Mrs Crane, he then finds her in the cellar. He then proceeds to pull out an enormous knife, and just when you thing Mrs Crane has had it, Sam gets there in the nick of time and grabs his arm. He is later taken to prison and questioned; the car was lifted out of the swamp along with Marion and the $40,000. One of the reasons why 'Psycho' had such an impact on his first audience was because of together, the un-expectancy from the audience, they were completely unaware of what they were going to see, and the very skilful way Alfred Hitchcock directed the scenes, particularly what he placed in the background (the mise-en-scene). ...read more.

The music is very important too, this music is very sinister, high pitched and has high tempo. The music adds a lot of tension and suspense in the audience. In the film, sometimes music will increase tempo, volume or will change. In some parts of the film sinister music is played. This adds tension and also keeps the audience in suspense because the audience knows that something will happen in that part. Conclusion One of the reasons why Psycho has such an impact on its audience was because of the manipulation of them, very cleverly by Alfred Hitchcock, by playing with your mind, and making you think, and actually believe things, that are of course not true. I watched Psycho, and I think it is one of the best films I have ever seen, in terms of keeping myself in suspense, and the tension of the film is immense, even though it was an old film, it is still very thrilling. In those days audiences weren't used to seeing naked flesh (in the shower scene) or blood, so it was a first, and a classic film. The famous Bates Motel, and Norman's house in the backdrop. Norman Bates. Andrew Hartnell 1 ...read more.