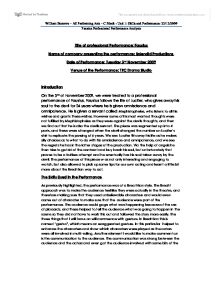 All That Jazz Workshop Diary

On the 3rd of November 2009, we were treated to a professional performance of Faustus. Faustus follows the life of Lucifer, who gives away his soul to the devil for 24 years where he is given omniscience and omnipotence. He is given a servant called Mephistopheles, who listens to all his wishes and grants these wishes. However some of his most wanted thoughts were not fulfilled by Mephistopheles as they were against the devils thoughts, and then we find out that he is also the devils servant. The piece was segmented up into 4 parts, and these were changed when the devil changed the number on Lucifer’s shirt to replicate the passing of 6 years. We see Lucifer flit away his life as he makes silly choices as to what to do with his omniscience and omnipotence, and we see the regrets he has in the latter stages of the production. Via the help of angels he then tries to get rid of the contract and buy back his soul, but unfortunately that proves to be a fruitless attempt and he eventually has his soul taken away by the devil. The performance of this piece was not only interesting and engaging to watch, but also allowed to pick up some tips for our own acting and learnt a little bit more about the Brechtian way to act.

The Skills Used In the Performance

As previously highlighted, the performance was of a Brechtian style. The Brecht approach was to make the audience feel like they were actually in the theatre, and therefore making sure that they used unbelievable characters and would even come out of character to make sure that the audience were part of the performance. The audience could gage what was happening because of the use of placards, and these helped to tell the audience what was going to happen in the scene so they did not have to work this out and followed the story more easily. The three things that I will focus on will commence with gesture. In Brechtian this is named “gestus”, which means an exaggerated gesture. In this particular helped to enhance the characters and show which characters were played as the actors were all involved in multi-rolling. Another element I would like to make comment on is the communication to the audience. The communication was strong between the audience and the actors and even got the audience involved with some bits of the performance. This helped to believe that the performance was in the theatre and did not look into the story any more as their thoughts were fully on the performer and what he was doing. Finally there use of special awareness was good because they all used a template constantly, for example, the person speaking would be in the centre and forward, an entering person would go through the curtain, and the less dominant character would be stood or making an action on the back right of the stage. I feel these skills have given us a good idea of what we need to do in future to enhance our own dramatic levels.

Why did the performers use the elements you specified in the previous point?

The performers will have used several devices to make the performance what it was. The reason why the performers used gesture was because it helped to enhance the characters even more as I previously stated, an example would be when the character came out of the curtain and made his body into a L shape whilst maintaining full contact with the audience visually. This created a focal point for the viewers and made them concentrate on the character rather than the storyline itself. They used several bits of gesture in their performance to illustrate what they were doing such as moving their hands vertically up and down to enhance the verisimilitude of the performance. The second thing I focussed on is the communication to the audience. This is important because the audience determine how successful the performance is, and by keeping in constant contact they maintained that relationship, a good example of this was when they got someone out of the audience to play one of the characters. This was particularly effective as it made sure the audience felt like they were in the room and not the story. The final thing I focussed on is special awareness, and they used special awareness in that way to signify the new character had been brought into the piece and this helped the audience understand this and ensured there was no confusion regarding characters. The particular use of the Brechtian technique was really good as it encapsulated all the basics and used them very well; the gestus and the coming out of character were particularly effective because it kept the audience viewpoint clear and direct at the stage and not the storyline.

How effective did you feel that these skills/techniques were in communicating ideas to the audience?

I believe that the communication between the performers and the audience was the key to success for Faustus. They used a varied style of performing rather than being totally bog standard to make sure that the play stood out and was memorable to the audience. I feel the strongest component of the performance were the strong gestures, as these are key in both the play but also the whole Brechtian technique. Because the gestures were so strange and imaginative, the audience needed to see these because it highlighted the character. A failure to see this gesture may have meant that they miss which character is being performed, and therefore they lose the plot and just become uninterested. Again with the mixture of oddness and the 3 second holding of this pose meant that the audience were focused on this action and kept hold of the plot throughout. I also feel that looking at the play helped me to gain more experience of the Brechtian elements that made the play so successful, and in future I will hope to add these in to certain performances (where applicable) to enhance my performance.