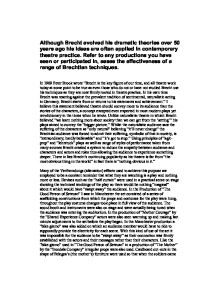 Although Brecht evolved his dramatic theories over 50 years ago his ideas are often applied in contemporary theatre practice. Refer to any productions you have seen or participated in, asses the effectiveness of a range of Brechtian techniques.

Although Brecht evolved his dramatic theories over 50 years ago his ideas are often applied in contemporary theatre practice. Refer to any productions you have seen or participated in, asses the effectiveness of a range of Brechtian techniques. In 1969 Peter Brook wrote "Brecht is the key figure of our time, and all theatre work today at some point to be true as even those who do not or have not studied Brecht use his techniques as they are now firmly rooted in theatre practice. In his own time Brecht was reacting against the prevalent tradition of sentimental, naturalistic acting in Germany. Brecht starts from or returns to his statements and achievement." I believe this statement believed theatre should convey more to its audience than the stories of the characters, a concept excepted even expected in most modern plays yet revolutionary in the times when he wrote. Unlike naturalistic theatre in which Brecht believed "we learn nothing more about society than we can get from the 'setting'" his plays aimed to convey the "bigger picture." ...read more.

which the props and costumes for the play were hung, throughout the play costume changes took place in full view of the audience. The sound booth and instruments were also on stage and were actually being tuned when the audience was entering the auditorium. In the production of "Mother Courage" by the "Shared Experience Company" actors were also seen warming up and making last minute adjustments to the set before the play began. In the Manchester production a "bike gismo" was also added on which an audience member would have to ride to supposedly provide the electricity for each scene. With this kind of use of the set it was impossible for the audience to be "swept away" as their connection was firmly established with the actors and their messages rather than their characters. Like the "bike gismo" used in "The Good Person of Setzuan" in a production of "The Mother" by the "Irondale Company" irregular props were also used. Cardboard cut-outs in the shape of Pelegea's (the mother's) ...read more.

In the production of "Antigone" this was emphasised as one of the actors pretended he couldn't fit the set apart, after a while the audience began laughing and so the actor with a theatrical bow struck the set and forced it together. Another Brechtian alienation effect used to distance the audience from the play was direct addresses, in which the actor would talk to the audience there by reducing the amount of empathy and also increasing the possibility for the audience to learn. In the performance in Manchester an ingenious idea was used to separate the acting in the play and the direct addresses which took place in between the scenes. Whist a red light was on we were told that the acting was taking place, when it was off we were told we would possibly be asked our opinions. Throughout the performance of the actual play we were constantly aware of the actors as the actors and not the characters and made more of an effort to learn from the piece. During the actual direct addresses the actors encouraged the audience into a debate over one of the key issues of "The Good Person of Setzuan": whether it was possible to remain good constantly and survive. ...read more.