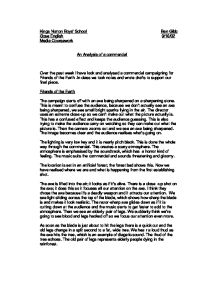 An Analysis of a commercial - Over the past week I have look and analysed a commercial campaigning for Friends of the Earth .In class we took notes and wrote drafts to support our final piece.

Kings Norton Boys' School Ben Gibb Gcse English 9/10/02 Media Coursework An Analysis of a commercial Over the past week I have look and analysed a commercial campaigning for Friends of the Earth .In class we took notes and wrote drafts to support our final piece. Friends of the Earth The campaign starts off with an axe being sharpened on a sharpening stone. This is meant to confuse the audience, because we don't actually see an axe being sharpened, we see small bright sparks flying in the air. The director uses an extreme close-up so we can't make out what the picture actually is. This has a confused effect and keeps the audience guessing. This is also trying to make the audience carry on watching so they can make out what the picture is. Then the camera zooms out and we see an axe being sharpened. The image becomes clear and the audience realises what's going on. The lighting is very low key and it is nearly pitch black. This is done the whole way through the commercial. This creates a scary atmosphere. The atmosphere is emphasised by the soundtrack, which has a horror kind of feeling. The music suits the commercial and sounds threatening and gloomy. The location is set in an artificial forest; the forest bed shows this. ...read more.

The tree shoots out red sap, which represents blood. This shows us that it doesn't just affect the trees it affects people's lives too. But the blood is meant to shock us because we think it is the legs, which are bleeding. This time the axe had gone deeper into the tree: this represents that were killing trees bit by bit and soon there won't be any left. By the second shot we begin to grasp what's going on and the picture becomes clear. At this time the lightning is still low key and dark so that it still creates a depressing and dismal mood. The axe comes up for a final third cut. We see another pair of legs but these are toddler legs about five years old. As we see a child's pair of legs the audience watch in horror, which adds a bit of excitement to the atmosphere. They are terrified if the axe actually cuts and slices the child's innocent legs, which adds a bit of a thrill. The lighting adds to the emotive atmosphere. We see a close-up of the axe and then the axe beams down on its target the child's legs. The camera pans and tracks the axe all the way down; this tries to add a bit of realism to the scene. ...read more.

The voiceover says " every year thousands of tribes people are made homeless by destruction of the worlds rainforest" They start off with a distressing sentence to catch our attention then he says "they are being robbed of their land that's been theirs for centuries, as one acre of forest is razed to the ground every second. Even if you couldn't care less about any of these facts, there's one thing you should care about-because it affects you." Now this sentence jumps out and grabs you and makes you realise it does affect you and what are you going to do about it. The advertisers also use graphics, they use graphics to focus our attention even more; the text is small and white and the background is black they choose black so the text stands out. There is nothing else on the screen so we have to focus our attention on the screen. The text implies how we are destroying the rainforest and what the effects are. They appeal to self-interest. The text gives us information how to give funds and donations, where to send it and a number. It also tells us how we can help. I think the target audience is aimed at people with self-interest and in some way intelligent adults and someone who would actually do something about the demolition of the rainforest. ...read more.