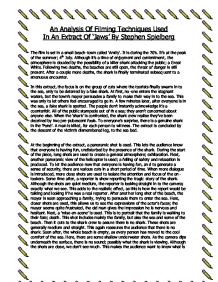 An Analysis Of Filming Techniques Used In An Extract Of 'Jaws' By Stephen Spielberg.

An Analysis Of Filming Techniques Used In An Extract Of 'Jaws' By Stephen Spielberg The film is set in a small beach-town called 'Amity'. It is during the 70's. It's at the peak of the summer; 4th July. Although it's a time of enjoyment and contentment, the atmosphere is clouded by the possibility of a killer shark attacking the public; a Great White. Following two deaths, the beaches are still open, the threat of danger is still present. After a couple more deaths, the shark is finally terminated subsequent to a strenuous encounter. In this extract, the focus is on the group of cuts where the tourists finally swarm in to the sea, only to be deterred by a fake shark. At first, no-one enters the stagnant waters, but the town's mayor persuades a family to make their way in to the sea. This was only to let others feel encouraged to go in. A few minutes later, after everyone is in the sea, a fake shark is spotted. The people don't instantly acknowledge it's a counterfeit. All of the public stampede out of the sea; they aren't concerned about anyone else. When the 'shark' is confronted, the shark crew realise they've been deceived by two pre-pubescent fools. To everyone's surprise, there is a genuine shark in the 'Pond'. ...read more.

Although the shots are close, we don't see much. This makes the audience want to know what is there. At this point, the shots are getting closer; we see less, therefore more tension. Subsequently, the mayor gives a speech. Quite close shots are used; to show expressions and so on. As the shots get closer, a woman sees a shark. This triggers a stampede. Here, slightly longer shots are used, this captures enough to let the audience see what chaos there is, but we don't see the full picture. There are some close-ups; the face of the man who was trampled upon to show how intense the scene is. There are quite few cuts, this gives us more information. When we see the lifeguards and the shark crew, close-ups are used, especially with the lifeguard; to show concern and sheer panic. When the shark crew spot the imitation of a shark, tilts are used. As the men stand armed with their guns, the camera is tilted up; we can see what the two boys see. Then, when the youngsters are shown, the camera tilts down slightly for the same effect. There is a part where there is a mid/long shot to show the boat and the boys. When a lady screams 'Shark!', one of the guards runs across the beach. ...read more.

Another important, but not so noticeable, aspect of the sound, was the bandstand in the background. This helped to construct a lively and comfortable scene. The music runs throughout the whole extract, up until the point where the first shark is spotted. This helps to give a tense and uneasy feeling. One of the most important characteristics of the sound, was during the discovery of each shark. During the first sighting, of the artificial shark, there is no Jaws signature music. When the real shark is sighted, the signature music cuts in. Although the audience doesn't spot this straight away, it does increase the tension and fear in the atmosphere. When the man is devoured, we do hear some of his screaming. If it wasn't for the cry of pain, there wouldn't have been the same amount of apprehension, concern; it wouldn't have been as effective. Overall, Spielberg uses various techniques to achieve the right frame of mind in the audience. Although separately, the techniques aren't very momentous, together, they make the perfect film. The element which he uses most cleverly, is the cinematography. He seems to have carefully chosen the different shots and angles to get the audience involved in the movie. He also utilizes the sound cunningly. The best example, of the chosen extract, is during the two shark sightings. From doing this essay, I have learnt some of Stephen's various techniques and what dissimilar characteristics are used to achieve eye-catching effects. By Surjeet Mann ...read more.