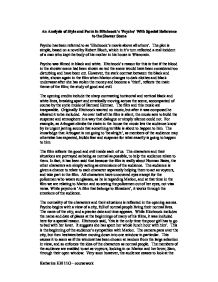 An Analysis of Style and Form in Hitchcock&amp;#146;s &amp;#145;Psycho&amp;#146; With Special Reference to the Shower Scene

An Analysis of Style and Form in Hitchcock's 'Psycho' With Special Reference to the Shower Scene Psycho has been referred to as 'Hitchcock's movie above all others'. The plot is simple, based on a novel by Robert Bloch, which in it's turn reflected a real incident of a man who kept the body of his mother in his house in Wisconsin. Psycho was filmed in black and white. Hitchcock's reason for this is that if the blood in the shower scene had been shown as red the scene would have been considered too disturbing and have been cut. However, the stark contrast between the black and white, shown again in the film when Marion changes to dark clothes and black underwear after she has stolen the money and become a 'thief', reflects the main theme of the film; the study of good and evil. The opening credits include the sharp contrasting horizontal and vertical black and white lines, breaking apart and erratically moving across the scene, accompanied of course by the eyrie music of Bernard Herman. The film and this music are inseparable. Originally Hitchcock wanted no music, but after it was composed he allowed it to be included. As over half of the film is silent, the music acts to build the suspense and atmosphere in a way that dialogue or simply silence could not. For example, as Arbogast climbs the stairs in the house the music lets the audience know by its urgent jarring sounds that something terrible is about to happen to him. ...read more.

Norman Bates was a normal person until his experiences and complex feelings caused him to loose track of rational thought. So much detail is given to the change over of cars and the motorcycle policeman to add detail to Marion's journey. As Hitchcock said, "You know that the public always likes to be one jump ahead of the story; they like to feel they know what's coming next. So you deliberately play upon this fact to control their thoughts. The more we go into the details of the girl's journey, the more the audience becomes absorbed in her flight." This means that when Marion arrives at the Bates Motel the audience is expecting her, not Norman, to be the main character of the film, which is what makes maroons murder in the shower so shocking and inapprehensible. It is hard for Marion to understand or control what she is doing, and so we understand why she decides she can drive no longer and stops at the Bates Motel. The audience knows that this is an unfavourable place to be by the way the sign suddenly looms out of the dark and mist. The Bates Mansion is also a daunting image. Norman Bates however dispels these feelings by being a likeable and shy young man. During his conversation with Marion, Norman helps her regain her freedom of choice in her life, and helps her decide to do the right thing and return the money. When Norman describes his own life this helps Marion. 'We are all in our private trap' he says. ...read more.

Guilt is again overpowering the rational actions of a person. Not persuaded by Norman's story Arbogast decides to investigate the house to talk to Norman's mother. As he walks up to the house and through the door the music begins it's warning tones. The audience is forewarned that something bad will follow. The camera uses a single shot as Arbogast climbs the stairs. He was made to look as innocent and complacent as he good. If close ups and different shots of him were used it would have given the impression more that he was doing something wrong, and that the suspense the audience fears will be released by him. When Arbogast reaches the top step the camera is placed very high for two reasons. The first is to hide the face of the mother when she comes out to stab him. The second is to make the close up shot of his horror stricken and blood smeared face directly afterwards all the more sudden and of impact. This murder could be considered more violent than Marion's, blood is visible on the victim's body, and the murder lasts for a longer length of time. The action is stretched out by Arbogast's fall down the stairs. The audience can see his face all the time while he is falling. To achieve this the crew superimposed a shot of Arbogast over a background of a shot taken by a camera moving down the stairs. The reason why to some Arbogast does not look like he is really falling at all is because he isn't even moving. ?? ?? ?? ?? Katharine Hill 11G - coursework ...read more.