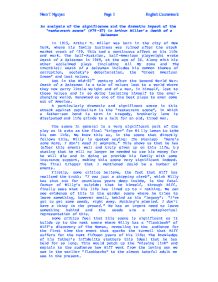 An analysis of the significance and the dramatic impact of the &quot;restaurant scene&quot; (P79-87) in Arthur Miller's Death of a Salesman

An analysis of the significance and the dramatic impact of the "restaurant scene" (P79-87) in Arthur Miller's Death of a Salesman In 1915, Arthur T. Miller was born in the city of New York, where his family business was ruined after the stock market crash of '29. This had a continuous affect on his life and work. The half-Austrian, half-American playwright wrote Death of a Salesman in 1949, at the age of 34. Along with his other acclaimed plays (including All My Sons and The Crucible): Death of a Salesman includes his common themes of corruption, society's deterioration, the "Great American Dream" and lost values. Set in the Mid-20th century after the Second World War: Death of a Salesman is a tale of values lost to a world where they now carry little weight and of a man, in himself, lost to those values and in so doing isolating himself to the ever-changing world. Renowned as one of the best plays to ever come out of America. A particularly dramatic and significant scene in this attack against capitalism is the "restaurant scene", in which a father-son bond is torn in tragedy, brotherly love is dissipated and life grinds to a halt for an old, tired man. ...read more.

Intent on revealing the simple truth behind Willy's fantasy: Biff's identity crisis can only be resolved by destroying his and his father's disillusionment, which has a devastating effect on Willy - leading to his suicide. However, taking into account of all the above, I personally believe this act is significant to the play as it provides great sympathy for all of the main characters. Biff, by his stage directions, is made to look sympathetic: "(takes a breath, then reaches out and grasps Willy's hand).... (Smiling bravely)...(Gets down on one knee before Willy) and so on. Even by the stage directions, the audience is shown the character of Biff as a sincere and caring person with an undying love for his father. Willy is shown sympathy through the mere bombardment of misfortunes that he faces: "I was fired, and I'm looking for a little good news to tell your mother...". Willy will be onstage in utter confusion and desperation in this scene, (at a loss), and empathy would be felt by the audience due to the music and lighting which places the audience into Willy's frame of mind. ...read more.

All of the "flashbacks" are juxtaposed with scenes of failure. The final dramatic scene in this extract is Happy's line of: "No, that's not my father". This is incredibly "low" and spiteful; the audience would not expect this even of Happy, who we know is already quite two faced in the way he acts towards Willy. Extremely tragic. This is right before Biff's "elegy" of Willy in which he refers to him as a Prince. However Happy cant even acknowledge him as a father. In Happy's defence Willy ahs not really been the ideal father, but he still had Hap's best interests at heart. However the audience can see that the character of Biff as a "changed man": no longer bound into the capitalistic system that engulfed Willy, no longer deluding himself or others, no longer a "LOW-MAN". In this extract, references are made to many different other stories. In Biff's speech Miller refers to "A Troubled Prince" as in Macbeth. In the scene afterwards where Biff is knocking on Willy's door, also have similarities to Macbeth. Willy's flashback to avoid the truth is reminiscent of Oedipus poking out his eyes. And finally Happy's dismissal of Willy is like that of Peter and Jesus. ...read more.