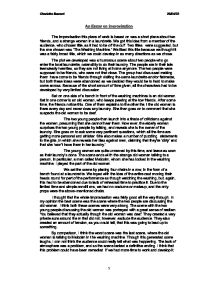 An Essay on Improvisation

An Essay on Improvisation The improvisation this piece of work is based on was a short piece about two friends, and a strange woman in a laundrette. We got this idea from a member of the audience, who chosen title, as it had to be off the cuff. Two titles were suggested, but the one chosen was 'The Washing Machine.' We liked this title because we thought it was a fairly broad title, which we could develop in as many directions as we chose. The plot we developed was a humorous scene about two people who go enter the local laundrette, ostensibly to do their laundry. The people are in their late teens/early twenties, so they are not living at home anymore. The two people were supposed to be friends, who were not that close. The group had discussed making them have come to be friends through visiting the same laundrette and/or flatmates, but both these ideas were abandoned as we decided they would be to hard to make come across. ...read more.

The scene ends with the strange old woman talking to a person, in particular, a man called Malcolm, whom she has locked in the washing machine. I played the part of the old woman. We set the scene by placing four chairs in a row, in the form of a bench found at a laundrette. We toyed with the idea of the entire cast moving their heads round for part of the performance as though watching the washing, but, again, this had to be abandoned due to lack of rehearsal time to practice it. Due to the limited time and simple conditions, we had no costume or makeup, and the only props were the above-mentioned chairs. I thought that the whole improvisation was fairly good all the way through. In my opinion the best scene was the scene where the two people are discussing the old woman. I think both these scenes were very strong. The scene with the two young people discussing the old woman was portrayed with a great sense of realism. ...read more.

The performance differed quite dramatically form rehearsals as we had only really had time for one proper rehearsal, and one or two rehearsals of the more difficult scenes, such as the one where the old woman first addresses the friends. I was quite happy about the performance, as I think were the whole group, as we felt it worked well. This made the performance work better, as we all knew each other enough to be able to judge the others moods. I think the audience were very helpful, as they found it quite funny (maybe too funny!), and were very encouraging. This may have been helped by the fact that the audience were made up of parents and friends, so they were slightly biased! I think that the idea we thought up was quite original, and worked well. I think this was due to it being a good idea, and the three of us working quite well together. However, we could have made it better with extra time to round the characters. At the start of the performance, the whole group was quite nervous, but we calmed down tolerably. However, there wasn't much in it to do with washing machines! Charlotte Seward 28/04/02 1 ...read more.