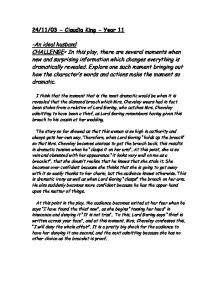 - An ideal husband - Analysis of the play.

24/11/03 - Claudia King - Year 11 -An ideal husband CHALLENGE= In this play, there are several moments when new and surprising information which changes everything is dramatically revealed. Explore one such moment bringing out how the character's words and actions make the moment so dramatic. I think that the moment that is the most dramatic would be when it is revealed that the diamond broach which Mrs. Cheveley wears had in fact been stolen from a relative of Lord Goring, who catches Mrs. Cheveley admitting to have been a thief, as Lord Goring remembers having given this broach to his cousin at her wedding. The story so far showed us that this woman is so high in authority and always gets her own way. Therefore, when Lord Goring "holds up the broach" so that Mrs. Cheveley becomes anxious to get the broach back, this results in dramatic tension when he "clasps it on her arm". ...read more.

It is a pretty big shock for the audience to have her denying it one second, and the next admitting because she has no other choice as the bracelet is proof. Now, Lord Goring is in control of the situation; he is a threat to Mrs. Cheveley because he knows something he can use against her. He shows this by threatening her that he will fetch the police and that she will be prosecuted. His tone, is of course much more confidant and his tone of voice seems very mocking and ironic: "You can't get that bracelet off... I see you don't know where the spring is. It is rather difficult to find". The audience would find this very amusing. The audience imagines that he is thinking that he could make a deal with her: if he takes off the bracelet and doesn't call the police, he could make her give him Sir. ...read more.

However, the moment the audience sees that Mrs. Cheveley "Catches sight of Lady Chiltern's letter", there is another case of 'dramatic irony'. The audience now knows that Mrs. Cheveley is up to her usual knifing causing high suspense. And when she asks Lord Goring for a glass of water, he is still so confident that he doesn't realise that she takes the letter as he goes and get the water himself when he could of called his servant in. The audience feels especially angry with him when Mrs. Cheveley suddenly decides that she does not need a glass of water anymore. The act ends with her informing him of what she has just done, and her getting, once again, the upper hand on things because she has proof to now, break up the marriage between Lady Chiltern and Sir Robert Chiltern. The audience is left in an annoyed and irritated mood as they imitate the look on Lord Goring's face; merely dramatic. ...read more.