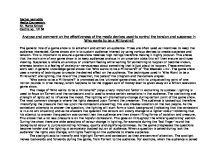 Analyse and comment on the effectiveness of the media devices used to control the tension and suspense in 'Who wants to be a Millionaire?

Rachel namuddu Media Coursework St. Marks School Centre no. 13156 Analyse and comment on the effectiveness of the media devices used to control the tension and suspense in 'Who wants to be a Millionaire?' The general role of a game show is to entertain and attract an audience. Prizes are often used as incentives to keep the audience interested. Game shows aim is to sustain audience interest by using various devices to create suspense and tension. This is important to ensure a game show receives high ratings therefore making it highly popular. This shows that the main aim of any game show is to keep audiences anxious in an uncertain state this will then ensure continues viewing. Suspense is where an anxious or uncertain feeling while waiting for something to happen or become known, whereas tension is a feeling of anxiety or nervousness about something that is just about to happen. These emotions work well in general knowledge game shows like 'Who wants to be a Millionaire?' of 'The Weakest Link'. The game show uses a variety of techniques to create the desired effect on the audience. The techniques used in 'Who Want to be a Millionaire?' are lighting, the role of the presenter, the pace of the program and the camera angles. 'Who wants to be a Millionaire?' is promoted as the 'ultimate' game show, with its unique selling point of one million pounds in prize money, which happens to be the biggest sum of money ever to given away on a British television game show. ...read more.

In 'Who wants to be a Millionaire?' as the contestant is put on the spotlight Tarrent will then cut to commercial. This is usually very sudden and generally leaves both the audience at home an in the studio in anticipation. This is used at crucial point to prolong the tension. This technique is normally used at the peak of tension. This technique is manipulated by the presenter at key moments, for instance when answering the �250,000 question. At the beginning of the game show Tarrent begins informally. He is relaxed and humorous, but becomes more formal and objective as the questions continue. Tarrent is often associated with humorous television programmes and his world famous radio show. Tarrent appeals to a wide target audience which further increases the popularity of the show. The presenter is also very important to 'Who want to be a Millionaire?' as he manipulates and is in charge of all the devices used in the programme. At this point the tone in his voice is firm and he is very distant. While on the other hand he can be more relaxed the camera, at this stage he is more humours and his facial expression changes to suit his mood and the tone in his voice is safer this usually happens in between question to relieve tension. The presenter tries to humour the contestant so that he does not make them feel too pressurised, so he changes the tension in which the game is being played form more serious to less this keep the presenter in control. ...read more.

The background sounds also vary a lot. At first you can hear heartbeat sounds while questions are being asked this is to mimic the contestants own heart beat creating suspense depending on whether or not the player has answered the question correctly. If the question is right the music will descend and it will become silent indicating that the player has lost. Pauses are also used after the question has been answered to build up the suspense at this point the presenter might choose to cut to commercial. A pause during a meager question issued by Tarrent and is very effective. The pause allows the contestant and audience to become anxious. The presenter also repeats the phrase "are you sure?" This question is used because Tarrent is trying to make the player rethink their options. Repetition is often used throughout the game show to grab audience's attention and to emphasise something of the importance - like the significance of the reply. The aim of repetition is used to create doubt in the contestant and to increase viewing pleasure. The effectiveness of the media devices used to control the tension and suspense in 'Who want to be a Millionaire?' shapes the show and is responsible for its popularity. Without all the different devices used then the show would not be effective enough meaning the audience that it is aimed at would not take any interest. The most effective device used is the presenter who manipulates various and other devices during the game and ensures that suspense and viewing figures are maintained ...read more.