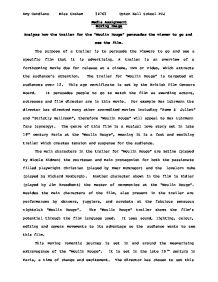 Analyse how the trailer for the &quot;Moulin Rouge&quot; persuades the viewer to go and see the film.

Amy Candiano Miss Graham 34763 Upton Hall School FCJ Media Assignment Moving Image Analyse how the trailer for the "Moulin Rouge" persuades the viewer to go and see the film. The purpose of a trailer is to persuade the viewers to go and see a specific film that it is advertising. A trailer is an overview of a forthcoming movie due for release at a cinema, DVD or video, which attracts the audience's attention. The trailer for "Moulin Rouge" is targeted at audiences over 12. This age certificate is set by the British Film Censors Board. It persuades people to go to watch the film as awarding actors, actresses and film director are in this movie. For example Baz Luhrmann the director has directed many other accredited movies including "Rome & Juliet" and "Strictly Ballroom", therefore "Moulin Rouge" will appeal to Baz Luhrmann fans (synergy). The genre of this film is a musical love story set in late 19th century Paris at the "Moulin Rouge", meaning it is a fast and exciting trailer which creates tension and suspense for the audience. The main characters in the trailer for "Moulin Rouge" are Satine (played by Nicole Kidman) the courtesan and main protagonist for both the passionate filled playwright Christian (played by Ewer McGregor) and the lovelorn Duke (played by Richard Roxburgh). Another character shown in the film is Zidler (played by Jim Broadbent) the master of ceremonies at the "Moulin Rouge". Besides the main characters of the film, also present in the trailer are performances by dancers, jugglers, and acrobats at the fabulous sensuous nightclub "Moulin Rouge". The "Moulin Rouge" trailer shows the film's potential through the film language used. It uses sound, lighting, colour, editing and camera movements to its advantage so the audience wants to see this film. This moving romantic journey is set in and around the mesmerising extravagance of the "Moulin Rouge". ...read more.

The interesting and unusual part of the "Moulin Rouge" trailer which is probably the most persuasive selling tool for the audience is the background music. The background music is very cleverly used by Baz Luhrmann and this is very unique. The songs played are specifically applied to the situation that is occurring in a particular shot to convey what is happening; for e.g. when Satine and Christian are together showing love towards one another the music is happy, soft and gentle rhythm, whilst when the Duke is in the frame, the music in the background has a strong, heavy drum beats with a fierce, angry rhythm. By using background music and musical lyrics rather than just spoken conversation between characters it adds more weight to the emotion being conveyed in that shot. This adds to the effect and makes the feelings between characters more heightened and recognisable for the audience. This persuades the viewers to go and watch the film. The music which is used throughout the trailer is contemporary, modern music of the current day: songs which the audience are familiar with, for example "Your Song" by Elton John and "Roxanne" by Sting. Although the film is set at the end of the 19th Century and the images in the shots show this, the music conveys feelings and emotions which have no historical boundaries, meaning the shots and music relate to each other. The director has chosen to use these contrasting but well relating devices as it shows that people's emotions have not changed even though music and fashion has. An example of this interesting film language is used in frames shot inside the "Moulin Rouge" were people are dancing, dressed in historical costumes. Over these shots "Roxanne" is played expressing passion and emotions of characters even more. Baz Luhrmann's clever directing influences the viewers into going to see the film by using sympathetic background music. ...read more.

The director must be able to combine shots without distracting the audience's attention from the images and narrative on screen. Baz Luhrmann is successful in doing this with straight cuts as well as with other styles of cut. At the end of this trailer the finally screens are the credits (names of actress' and actor's) and then the screen fades to black meaning that is the end of the trailer. This method is called fade-out. This style of editing is used to signify to the audience that something tense is about to happen or has just happened, or that the trailer has ended. This leaves the audience in suspense so they have to go and watch the "Moulin Rouge". In the tenth to eleventh frames these are joined with a dissolve cut. In the tenth shot it shows the inside view of the "Moulin Rouge" club. Then the eleventh shot, which is a shot of Satine standing on the stage, is slowly brought in beneath the other image. A dissolve cut blends shots together without the audience noticing them. The director uses dissolve cuts to join shots together to add a variety of different styles of editing to the trailer, to make it more interesting to watch for the audience. The director has chosen to use a jump cut to draw the audience's attention onto an object very suddenly. Baz Luhrmann uses a jump cut when focusing the viewer's attention onto Satine's diamond necklace in a blue velvet box. It is a quick shot but the audience's attention is brought into focus very quickly as the Diamonds sparkle in the light. This is significant as the jewellery is a present from the Duke to Satine, who the audience know this is unusual as Satine feels tense around him. The director does this to influence the audience by suggesting the Duke is buying Satine's love with the necklace. This makes the viewers detest the Duke even more. By using a variety of different style editing methods this makes the trailer more unique, persuading the audience to go and see the film. ...read more.