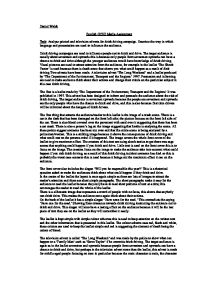 Analyse printed and television adverts for drink driving campaign. Examine the way in which language and presentation are used to influence the audience.

Daniel Walsh English GCSE Media Assignment Task: Analyse printed and television adverts for drink driving campaign. Examine the way in which language and presentation are used to influence the audience. Drink driving campaigns are used to influence people not to drink and drive. The target audience is usually about seventeen and upwards this is because only people from seventeen upwards can have a chance to drink and drive although the younger audiences would have knowledge of drink driving. Visual pictures are used to attract attention from the audience, for example in the leaflet 'The Shock Factor' is used because there is death scene that shows you what could happen as a result of dink driving Two adverts have been made. A television advert 'The Long Weekend' and a leaflet produced by 'The Department of the Environment, Transport and the Regions' 1997. Persuasion and informing are used to make audience think about their actions and change their minds on the particular subject in this case drink driving. The first is a leaflet made by 'The Department of the Environment, Transport and the Regions' It was published in 1997. This advert has been designed to inform and persuade the audience about the risk of drink driving, The target audience is seventeen upwards because the people are seventeen and upwards are the only people who have the chance to drink and drive, and this is also because first time drivers will be informed about the dangers of drink drivers. ...read more.

The target audience is again as in the leaflet seventeen and upwards because people from seventeen and upwards can have a chance to drink and drive, but perhaps in the television advert more than the leaflet, this advert is made for middle aged people focusing on men in particular because the main character is male, the character 'Steve Taylor' is a father and this is why it is made for middle aged audiences because they would be parents and if they were to drink and drive this would be the position they would be in. The story is of a middle aged man 'Steve Taylor' who is caught drink driving. Through the advert he explains his life to the audience, he explains the consequences of drink driving on his life, he tells the audience what will happen to him if he is found guilty e.g. loses his job, loses his licence. He goes though different moods through the advert, depression, desperation, optimism, aggression, frustration, sarcasm. He goes through these moods to show the audience what he is going through in his head. The character 'Steve Taylor' interacts with the audience to let them relate with him, He actually ask the audience questions and ask them to raise there hands if they have done any crime in the past, He also talks directly to the audience throughout the advert Because the audience are the only people he can talk to increasing the feeling of loneliness towards 'Steve' from the audience. ...read more.

The audience hear the already known story that 'Steve' had told them but their is a twist at the end that shocks the audience, all sound stops and 'Steve' reveals that as a result of the accident he has killed an innocent child. He tells the audience that his sentence is temporary, but the death of the child will lay on his guilt conscience forever. The adverts blacks out and it is over, this leaves the audience shocked, again leads to the audience to think about their actions. The whole advert shows that drink driving can happen to anyone, and can ruin the life of a 'family man' forever. It is all about stopping people from drink driving. There are many similarities in the two adverts, they are about the same subject, they have the same target audiences, the television advert uses 'Steve Taylor' to show that drink driving can happen to anyone. The advert effects the audience more than the leaflet because of the shock factor at the end and throughout and the advert, the main characters is used to relate the audience and show what can happen to someone through feelings and thoughts. The leaflet informs the audience and is effective at grabbing the attention of the audience on the front cover. Both adverts are effective at informing the audience and making them think about their actions on drink driving. By Daniel Walsh ...read more.