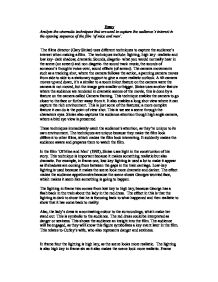 Analyse the cinematic techniques that are used to capture the audience's interest in the opening sequence of the film 'of mice and men'.

Essay Analyse the cinematic techniques that are used to capture the audience's interest in the opening sequence of the film 'of mice and men'. The films director (Gary Sinise) uses different techniques to capture the audience's interest when making a film. The techniques include: lighting, high key -realistic and low key- dark shadow, dramatic. Sounds, diagetic- what you would normally hear in the scene (on screen) and non diagetic- the sound track music, the sounds of someone's thoughts voice over, sound effects (of screen). The camera movements such as a tracking shot, where the camera follows the action, a panning camera moves from side to side to a stationary support to give a more realistic outlook. A tilt camera moves up and down, it's a similar to a zoom in/out feature on the camera were the camera is not moved, but the image gets smaller or bigger. Sinise uses another feature where the audience are rendered in dramatic scenes of the movie, this is done by a feature on the camera called Camera framing. This technique enables the camera to go closer to the face or further away from it. ...read more.

The audience will be engaged, as they will know this figure symbolizes a key event later in the film. This relates to Curley's wife, who also represents danger and sexiness. In frame four the lighting is high key, as the scene looks more realistic. The lighting is also high key in frame six as it also makes the scene look more realistic. Frame fourteen however, shows us a low-key lighting as its intention is to get dramatically darker, to frighten the audience. The use of sound is very important because it brings the film to life because the audience can hear as well as see what is going on. There are two different types of sound techniques; diagetic-what you would normally hear in the scene (on screen) and non diagetic- the sound track music, the sound of someone's thoughts voice over, sound effects (off screen). For instance, in frame one the sound is diagetic in the train because it is what you would normally hear on real train. Also the effect in this is that it makes the audience more aware as the sound of the train is coming nearer. ...read more.

In frame six the camera movement is a tracking shot as it follows George and Lennie to show the effect of being chased. However, the camera in frame fourteen is zooming in to show that the train is approaching. The final important technique we come across is the camera framing. This is important because you need to get the full picture in the frame from all angles. For instance, frame one shows the close up of George's worried face. Frame two is a long shot as it includes the surroundings around the lady in the red dress, then towards the end of the frame it becomes a medium shot as it gives the impression that she has run a long way. Frame four is along shot as it shows her running towards the farmers. Again frame six is a long shot. Frame fourteen is a long shot/medium shot. I have analysed that the cinematic techniques used certainly catches the audience's interest. The cinematic techniques used by a film producer, and by Sinise in `Of Mice and Men`, certainly capture the viewer's interest. All the four techniques have been effective in producing realistic and dramatic effects and also keep you in suspense. Therefore keeping you glued to the screen. ...read more.