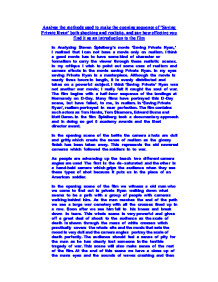 Analyse the methods used to make the opening sequence of 'Saving Private Ryan' both shocking and realistic, and say how effective you find it as an introduction to the film

Analyse the methods used to make the opening sequence of 'Saving Private Ryan' both shocking and realistic, and say how effective you find it as an introduction to the film In Analyzing Steven Spielberg's movie 'Saving Private Ryan,' I realized that I can not base a movie only on realism. I think a good movie has to have some kind of character or formalism to carry the viewer through these realistic scenes. In my critique I wish to point out some uses of realism and camera effects in the movie saving Private Ryan. In my eyes saving Private Ryan is a masterpiece. Although the movie is nearly three hours in length, it is evenly distributed and takes on a powerful subject. I think 'Saving Private' Ryan was not another war movie; I really felt it caught the soul of war. The film begins with a half-hour sequence of the landings at Normandy on D-Day. Many films have portrayed this D-Day scene, but have failed, to me, in realism. In 'Saving Private Ryan', realism portrayed in near perfection. The film contains such actors as Tom Hanks, Tom Sizemore, Edward Burns and Matt Daron. In the film Spielberg took a documentary approach and in doing so got 5 academy awards and the Best director award. In the opening scene of the battle the camera shots are dull and gritty which create the sense of realism as the glossy finish has been taken away. ...read more.

Then the camera zooms out and a man is vomiting from the nerves. This confirms to the audience that nearly all of the soldiers are nervous or scared of war. Next lots of orders are shouted out which sets upon the audience that blood shed is about to follow no matter what. Next the door comes down and the camera moves outside the boat and bullets hurtle down to the soldiers and nearly all of them are slaughter. This makes the audience feel for those poor people stuck on the boats. As people are getting shot others are bailing out over the side of the boat trying to escape from the gun fire but in doing so the soldiers are getting pulled under, and drowned by there own equipment . The camera follows them down to show the audience every bit of pain and anguish they are going though. As the soldiers are advancing up the beach, there is constant gun fire and explosions so everyone is shouting if they need to say something which adds to the creation of the realism of the atmosphere, so the audience get the sense of the extensive noise level. The gun fire is apart of the atmosphere in its self, as the 'whizzing' and the 'thud' made when a bullet hits a soldier so the audience knows when someone has been shot. As the battle rages on more and more people are having limbs blown off and are being picked off by the German machine gunners in there bunkers. ...read more.

Then we have a close up of his hand shaking which is repeated to give effect then switches to a close up of his eyes then it goes to his view point to show the audience what he could see. Light airy music fades in to add to the peacefulness now that the carnage is over so the transition from death to calm is portrayed to its full potential. We are shown a long shot of bloody water washing over the masses of bodies then a close up of a soldiers boots. The sea is now red with the blood of the dead and wounded and then eventually zooms in on the wording of a soldiers backpack - RYAN. In my opinion Spielberg has done exceedingly well to illustrate to horror of war in such a distinct way . All of the other war films I have watched the allies seem to have a super human figure as there main character whereas in 'Saving Private Ryan' the main character seems to be a normal individual . Spielberg has taken in the facts and made a interesting interpretation of how it may have seemed but not making either side look to have any advantage or disadvantage over the other. This opening sequence prepared me for what was to follow as you could actually sense how the soldiers might have felt from the well illustrated feeling put up on the screen for example the repeated scene of the hand shaking or the vomiting in the boat but the whole thing put together this more than prepared me for the film. ...read more.