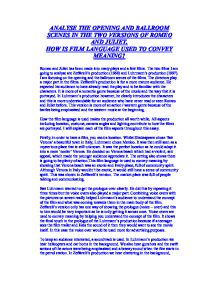 Analyse the Opening and Ballroom Scenes In the Two Versions of Romeo and Juliet.

ANALYSE THE OPENING AND BALLROOM SCENES IN THE TWO VERSIONS OF ROMEO AND JULIET. HOW IS FILM LANGUAGE USED TO CONVEY MEANING? Romeo and Juliet has been made into many plays and a few films. The two films I am going to analyse are Zeffareli's production (1968) and Luhrmann's production (1997). I am focusing on the opening and the ballroom scenes of the films. The directors play a major part in the films. Zeffareli's production is for a more mature audience. He expected his audience to have already read the play and to be familiar with the characters. It is more of a romantic genre because of the music and the way that it is portrayed. In Luhrmann's production however, he clearly introduces the characters and this is more understandable for an audience who have never read or seen Romeo and Juliet before. This version is more of an action / western genre because of the battles being emphasized and the western music at the beginning. How the film language is used makes the production all worth while. ...read more.

In this case the voice over would be used more for advertising purposes. To keep an audience interested, a soundtrack is used. In Luhrmann's production we hear helicopters and car horns in the background. We also hear gunshots and the swift actions of the actors were being emphasized and a breezy sound when the fire starts in the petrol station. In Zeffareli's production we hear chattering in the background, horns and bells, horses and mothers screaming with their babies. The differences between the sounds show which the modern production is and which the older production is. The soundtrack conveys meaning by showing that the Capulets and the Montague's aren't just causing havoc between themselves, but also on the whole of the town and the gunshots show that's its violent and other people are going to be hurt, either emotionally or physically. The next most important aspect is the music. In order to create the atmosphere that the director requires, music is used. For example, if the director wants to create a Romantic atmosphere then he would use slow, classical music. ...read more.

and have a casual look to them. Costume is used by the director to convey meaning by giving us an overview of the situation and how both sides (the Montague's and the Capulet's) are so different. Camera angles make the film either interesting or a complete failure. In Luhrmann's and Zeffareli's case, they have made it very interesting .In Luhrmann's production, the fast shots contrast with the freeze frames to show tension in the atmosphere. And there are lots of birds eye views of the action at the garage. Also there are major close up shots to show the fear in the actors eyes. This is more effective the having a far shot. In Zeffareli's version, there are big close ups and medium close ups where action is involved. There are long shots to show the extent of the damage done on the village during the battle and there are plenty of shots in which a moving actor walks into the space. Baz Luhrmann uses the camera angles to convey meaning by giving it a hidden meaning, Whilst the shots are moving and giving you fascinating views of the characters, it is making you want to keep watching it and explore the differences in the characters. ...read more.