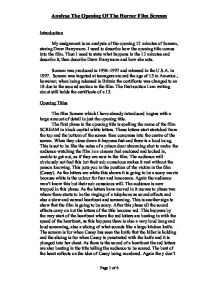 Analyse the opening of the horror film 'Scream'

Introduction My assignment is an analysis of the opening 12 minutes of Scream, staring Drew Barrymore. I need to describe how the opening title comes into the film. Then I need to state what happens in the 13 minutes and describe it, then describe Drew Barrymore and how she acts. Scream was produced in 1996-1997 and released in the U.S.A. in 1997. Scream was targeted at teenagers around the age of 15 in America, however; when being released in Britain the certificate was changed to an 18 due to the second section in the film. The first section I am writing about still holds the certificate of a 15. Opening Titles The film Scream which I have already introduced begins with a large amount of detail in just the opening title. The first phase in the opening title is spelling the name of the film SCREAM in block capital white letters. These letters start stretched from the top and the bottom of the screen then compress into the centre of the screen. When they close down it happens fast and there is a loud bang. This is set to be like the noise of a prison door slamming shut to make the audience watching the film in a cinema feel enclosed and locked in, unable to get out, as if they are now in the film. The audience will obviously not feel this but their sub conscious makes it real without the person knowing. This puts you in the position of the victim in the film (Casey). ...read more.

It could make some of the audience be afraid to go home; Casey is not safe in her home why should they be? It gets the audience thinking about the possibilities and scared. The director has set it for the audience to no that Casey knows the layout of her own house, but for the killer to no it too. Another reason to choose her house for the murder scene is that no matter how much sound Casey made know one would hear her because her nearest neighbour is a few miles away. She is isolated. Parents Casey's parents seem to be very loving parents because Casey is most likely to be an only child and her parents want her to be in their house for as long as possible. Or they have other children who have already grown up and left home. I got this impression from when Casey's parents first walked into the house and the first name they called was Casey's. Casey's Mum is a loving person and loves Casey to bits because when she sees what has happened to the house and she screams Casey's name she starts to cry. I get the impression that Casey's Dad is a loving parent/husband too. We see this when he walks into the house and he sees all the mess then he hears Casey whispering on the phone as she is dying, (she cant speak because the killer has stabbed her in the throat) and Casey's Mum is in a state of collapse over it so he tells her to go to the neighbours house to keep her out of harms way. ...read more.

As the camera follows Casey into the kitchen it glides through a solid worktop that the camera had previously showed. The cinematographer made us think that we were outside all the time looking at her like the killer in the middle of nowhere. The camera places now are to create an emotive response. Realism The film achieves its purpose as it makes us want to know what is happening to Casey, and that we become involved in her attempt to save her life. It uses a typical all American girl with typical family. I explain this in 'Parents' and 'Casey' analysis'. Adrenaline These are scenes in the first part of Scream that make the audience jump. - When the killer says on the phone; "I want to know who I'm looking at" - When Casey's boyfriend is gutted - When the chair is thrown through the patio window - Where the killer pops his head to the window and the killer and Casey see each other for the first time in the movie face-to-face - When Casey's Mum goes to ring the police and Casey is being stabbed -When Casey's Dad runs up to Casey when she is hanging in the tree dead. Review The opening of Scream was very successful because it fulfilled its purpose in scaring people and making their self conscience take control. Watching the opening makes me want to see more and watch the rest to find out who Casey's killer is and to see what sort of scares I am going to get next. ?? ?? ?? ?? Analyse The Opening Of The Horror Film Scream Page 1 of 6 ...read more.