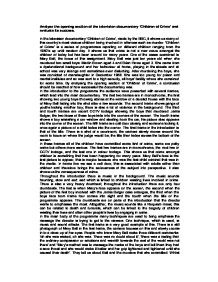 Analyse the opening section of the television documentary 'Children of Crime' and evaluate its success.

Analyse the opening section of the television documentary 'Children of Crime' and evaluate its success. In the television documentary 'Children of Crime', made by the BBC, it shows us many of this country's most vicious children being involved in offences such as murder. 'Children of Crime' is a series of programmes reporting on different children ranging from the 1960's up until modern day. It shows us that crime is not a new craze amongst the children of today but has been around for many years. One of the cases examined is Mary Bell, the focus of this assignment. Mary Bell was just ten years old when she murdered two small boys: Martin Brown aged 4 and Brian Howe aged 3. She came from a dysfunctional background and her behaviour at home, playing in the streets and at school was very strange and sometimes even disturbing. After murdering the boys, she was convicted of manslaughter in December 1968. She was too young for prison and mental institutes and so was sent to a high security, all boys' facility where she remained for some time. By analysing the opening section of 'Children of Crime', a conclusion should be reached of how successful the documentary was. In the introduction to the programme the audience were presented with several frames, which lead into the main documentary. ...read more.

People who knew Mary Bell make three different comments: 'oh she was wicked, oh she was. There was no doubt about it', 'there was a feeling that the ordinary compassion or emotions and warmth towards the rest of the world was not there' and 'Mary's method was to massage the necks of the boys and tell them they had a sore throat and she would make it better and her grip tightened and tightened until she caused their death'. They tell us about Bell and the murders that she committed. Whilst this happens, the music is a very simple tune consisting of four notes only. This is appropriate to children as it is the kind of tune a child would play at the piano. The tune is also a simple one because the director wants us to focus on the comments being said about Mary Bell. The next frame is the skyline of Newcastle, it as set at dusk making the area look more threatening. As the title appears on the screen reading 'The Mary Bell Case' another note is played alongside the previous tune making a chord, to emphasise the title. Around frame 14 there is also music. There are a series of different monochrome shots of the Scotswood area. ...read more.

The next seven frames are archive footage and show what people were like in those days: it shows people drinking alcohol, which seemed to be a typical pastime. The director wants the audience to see what the area was like then and what environment was around Bell as she was growing up. Later, around frame fourteen, there is more archive footage shown also showing the area of Scotswood. Whilst these shots are on the screen there is a voiceover from a woman telling the audience what type of crimes were committed. This technique is very effective as it puts the date into perspective and gives the audience a chance to see Scotswood back then. The final technique used is colour footage. This contrasts with the archive footage and is very effective. In frame nine it shows a colour shot of a terraced house in Scotswood. Straight after this shot is a monochrome shot of the same street. This shows the audience what it is like now compared to then. It is a very effective way of putting things into perspective. In conclusion I think this documentary was biased against Mary Bell. The techniques used were also very helpful in persuading the audience. The techniques used depended on each other if they were to have full effect and the director put them together very well. In my opinion, it was very successful in persuading the public to think Bell was wicked. ...read more.